Bigg Boss 13: "No one else in the house is allowed to talk when the episode is on air," Ananya Panday said 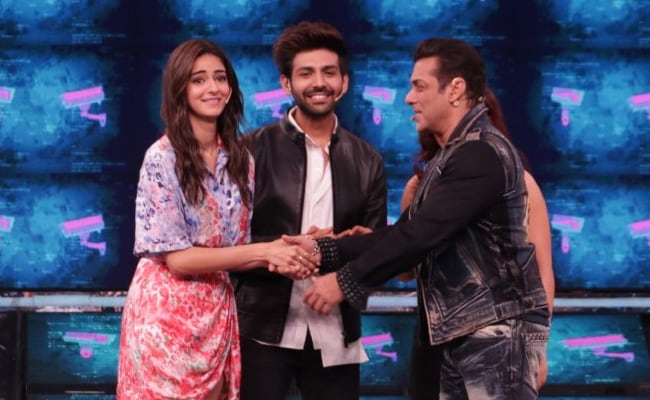 Bigg Boss 13: Ananya Panday on the sets of the show with Kartik Aaryan and Salman Khan.

During an interview with news agency IANS, Ananya revealed that she is so "obsessed" with the show that on her 17th birthday, her mother Bhavana Panday got her a special Bigg Boss-themed cake. "I have been watching the show ever since. I think this is one of the shows that my mom and I bond over. In fact, my mother got a Bigg Boss-themed cake on my 17th birthday because I was so obsessed with the show. I am one of those obsessed fans who ask everyone to keep quiet when the show comes on TV," IANS quoted Ananya as saying.

Ananya talked about how she was "overwhelmed" when she learnt that she would be on the show to promote her upcoming film. "So, finally when I went to Bigg Boss 13 for Pati Patni Aur Woh promotions, I was so much in awe I couldn't speak much. I was like, 'Is this for real?' I was overwhelmed to see Salman Khan Sir in real life! I was like... 'Am I really here on the set of Bigg Boss', a show that I have seen so many years?"

Ananya Panday is busy with the promotional duties of Pati Patni Aur Woh, co-starring Kartik Aaryan and Bhumi Pednekar. Ananya, the daughter of actor Chunky Panday and Bhavana Panday, made her Bollywood debut with the 2019 film Student Of The Year 2, co-starring Tara Sutaria and Tiger Shroff. Ananya will next be seen in Khaali Peeli, opposite Ishaan Khatter.