"Climax on a rotating Restaurant, a set built at Chandivali Studio and it rotated... so action scenes, drama, Restaurant on fire, all done while it rotated," wrote Big B in the caption 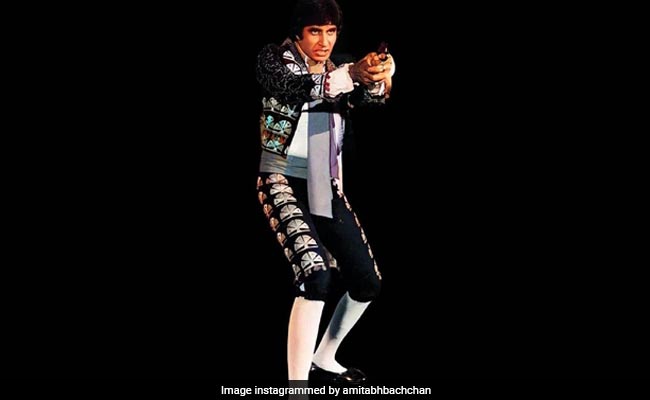 Did you know that Amitabh Bachchan shot the climax song Rang Jamake Jayenge of his 1981 film Naseeb on a "rotating restaurant, a set built at the Chandivali Studio in Mumbai"? It's true and the film, directed by the iconic filmmaker Manmohan Desai, turned out to be a super hit in the 80s. On Wednesday, Amitabh Bachchan revisited Naseeb memories and posted an epic picture of himself dressed as a matador for his role in the film that also starred Shatrughan Sinha, Hema Malini and late actor Rishi Kapoor in the lead roles. "The matador and the gun... film NASEEB... climax on a rotating Restaurant, a set built at Chandivali Studio and it rotated... so action scenes, drama, Restaurant on fire, all done while it rotated," wrote Big B in the caption and added: "Only the great Manmohan Desai could conceive all this... and succeed... and we're talking the 80's...no VFX no CG nothing... Those were the days my friend."

For Amitabh Bachchan's granddaughter Navya Naveli Nanda, his picture from the 1981 film is awesome. She shared his photo on her Instagram story and accompanied it with Collision emojis, which can be used for a mind-blowing photo, fact, event or experience. Last year, few days before Rishi Kapoor's death, Big B had shared a picture of himself and the late actor from the sets of Naseeb. Rishi Kapoor played the role of Amitabh Bachchan's character Johny's younger brother Sunny in the film. "In the days of yore... shooting for the song 'Rang Jamaake' for film NASEEB for Manmohan Desai, the crazy genius... on a revolving set restaurant built at Chandivili Studios... Chintu as Chaplin, moi as a matador... song action scenes all on this set...action on the restaurant on fire... what times," Big B had captioned the photo.