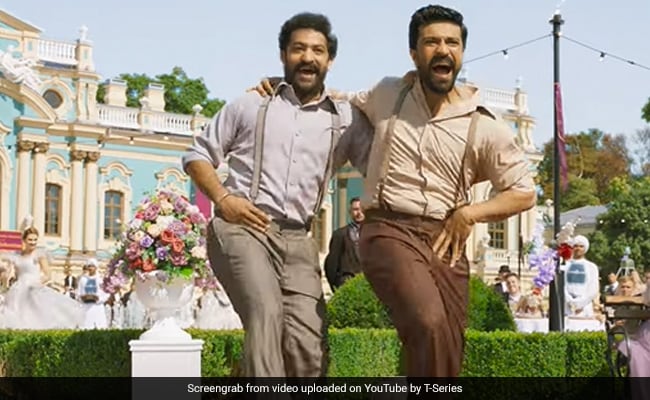 The RRR Mass Anthem featuring Jr NTR and Ram Charan is finally here and it sets the dance mood just right with its "electrifying" beats. Directed by M M Kreem and sung by Vishal Mishra, Rahul Sipligunj, the song titled Naacho Naacho features Ram Charan and Jr NTR, who play the roles of freedom fighters Alluri Seetharamaraju and Komaram Bheem, respectively, in the film set in the 1920s, dancing like no one's watching to the "kick-ass" beats of it. Thanks to their retro looks for their respective characters, Jr NTR and Ram Charan look "dancing dynamites" in Naacho Naacho. The groove moves of the actors have been choreographed by Prem Rakshith.

The music video also has some BTS clips featuring director SS Rajamouli from the rehearsals of the track in between.

"Had a great time shaking a leg with my brother Ram Charan to the electrifying beats of #RRRMassAnthem," read Jr NTR's caption.

Naacho Naacho has been released in five languages, including Hindi.

RRR is set in the 1920s and it is a fictitious story based on two legendary freedom fighters - Alluri Seetharamaraju and Komaram Bheem, who fought against the British Raj and the Nizam of Hyderabad, respectively.

He derives strength from empowering his people!

Earlier this month, the makers of RRR shared a glimpse of the film and sent the Internet into a tizzy. Take a look:

RRR will open in theatres on January 7 next year in Tamil, Telugu, Hindi, Kannada and Malayalam.