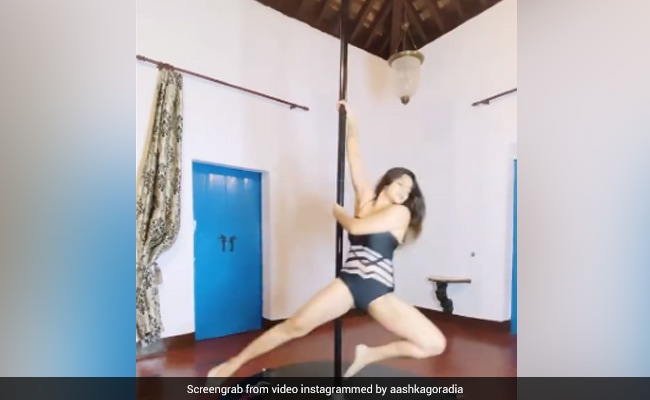 Aashka Goradia in a still from the video. (courtesy aashkagoradia)

TV actress Aashka Goradia, who is a pro at pole dancing and often resorts to it a as a means of fitness, shared a new video on her Instagram profile. The actress, who makes the entire process looks very easy, got a huge shout our from her friends from the TV industry. Mouni Roy dropped a couple of fire emojis. Jennifer Winget too posted a few heart-eyed emojis in the comments section. Posting the video, she captioned the post: "Get on it baby. Late evening sessions." She added the hashtags #polefitness, #polefit, #polelove #spin, #strength,#swirl and #heal.

Besides pole dancing, Aashka Goradia is equally adept at yoga. These pictures speak for themselves.

Earlier this year, Aashka announced on her Instagram story that she had contracted the virus. She wrote: "In preparation for our trip to my home in the US, Brent Goble and I have both tested positive for COVID. We have been reeling from this news since this morning when we were just about to leave Goa. Both of us are feeling fine physically but the test reports say otherwise and that means we have to let the virus run its course. Thankfully with our active and healthy lifestyle, we aren't experiencing any deliberating symptoms. We are at our home in Goa, safe, and not in contact with anyone."