"I'm right where I want to be," wrote Nushrat 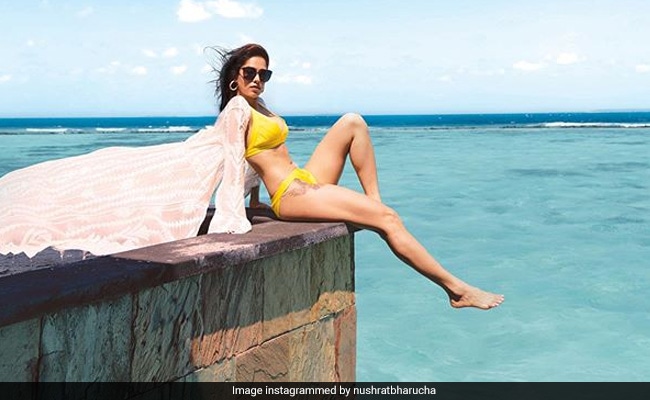 Dream Girl actress Nushrat Bharucha is slaying Instagram by posting pictures from her Maldives vacation. The actress added a couple of more photos to her Maldives diaries and her pictures prove that she is exactly "where she wants to be." On Saturday, Nushrat delighted her fans by Instagramming pictures of herself in bikinis. In one of the photos, she could be seen sporting a bright yellow bikini while in another; she can be seen having a gala time in a pink bikini. The scenic beauty in the backdrop is breathtaking, without any doubt. Sharing the pictures, Nushrat captioned them: "I'm right where I want to be!"

Here are the photos we are talking about (swipe left):

Like we said above, Nushrat's previous pictures from her Maldives vacation took our breath away. In the pictures, the actress could be seen wearing a red bikini, which she paired with a peach-coloured sarong. And how can we forget about her lavish floating breakfast pic, which made us green with envy. She looked gorgeous in a magenta-coloured bikini in those pictures. In case you haven't seen them yet, check it out:

Nushrat Bharucha made her debut in Bollywood with the 2009 film Kal Kissne Dekha. Post that, she went on to feature in films such as Pyaar Ka Punchnama 2, Sonu Ke Titu Ki Sweety and Dream Girl. Nushrat Bharucha will next be seen in Hansal Mehta's Chhalaang, in which she will share screen space with Rajkummar Rao. The film was earlier titled Turram Khan. Chhalaang will open in theatres on January 31 next year.