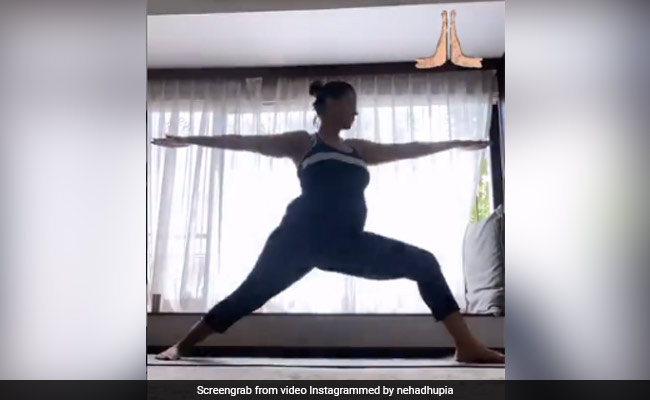 Neha Dhupia in a still from the video. (courtesy nehadhupia)

Actress Neha Dhupia, who is expecting her second child with husband Angad Bedi, resorts to yoga as a means of fitness. The actress, who does yoga under the guidance of her trainer, shared a video from a session on her Instagram profile on Tuesday. She wrote: "They say that everything that you have been practising before your pregnancy is something you should continue with, for the 9 months too. Yoga and meditation is a form of exercise I have doing for almost 20 years. Of course the body responds very differently now but staying fit and active is something I would advocate all through." Neha Dhupia added, "The asanas are very different when you are practising pre natal yoga and must be done under guidance. I have been guided by Rohit flow yoga."

Neha Dhupia announced her second pregnancy on social media with a super cute post earlier this month. "Took us 2 days to come with a caption...The best one we could think of was ... Thank you, God. #WaheguruMehrKare," the actress wrote announcing her pregnancy."

Neha Dhupia married Angad Bedi  at a private ceremony in New Delhi in 2018. The couple welcomed their daughter Mehr in the same year. Angad Bedi starred in the biopic Gunjan Saxena: The Kargil Girl, which stars Janhvi Kapoor in the titular role.

In terms of movies, Neha Dhupia was last seen in the short film Devi, alongside Kajol and Shruti Haasan. She also featured as one of the gang leaders on Roadies Revolution. Neha, a former beauty queen, is best-known for her performances in films such as Singh Is King, Hindi Medium, Tumhari Sulu and Lust Stories among many others.