Anushka Sharma has actively been sharing posts from her maternity diaries 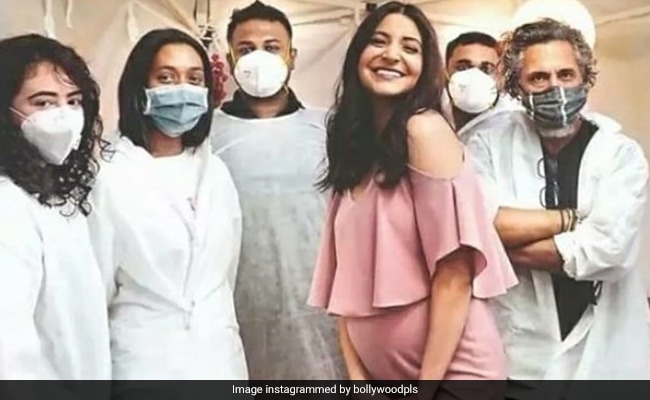 Pregnant Anushka Sharma is busy with work these days and we got a glimpse of her busy schedule, courtesy many fan pages dedicated to the actress on social media. A brand new picture of mom-to-be Anushka Sharma is doing the rounds on social media, in which the actress can be seen posing with her team. The actress, who is expecting her first child with her cricketer husband Virat Kohli, can be seen in a soft pink dress as she smiles with all her heart along with her team, members of which can be seen wearing PPE kits and masks. The viral picture has been curated by several fan pages and it is spreading like wildfire on social media.

The actress frequently shares pictures from her maternity diaries. See some of the posts here:

In August this year, the actress and Virat Kohli announced the big news of their pregnancy on social media. Posting a happy picture of themselves, the couple wrote: "And then we were three. Arriving January 2021." Members of the film as well as the cricket fraternity congratulated the couple on social media.

Anushka and Virat Kohli  met during the shoot of a shampoo commercial and they got married at a countryside resort in Tuscany in a private ceremony in December 2017 after dating for several years.