The Makar Sankranti album features a perfect pic, in which Chiranjeevi can be seen posing with wife Surekha Konidela while Ram Charan joins Upasana 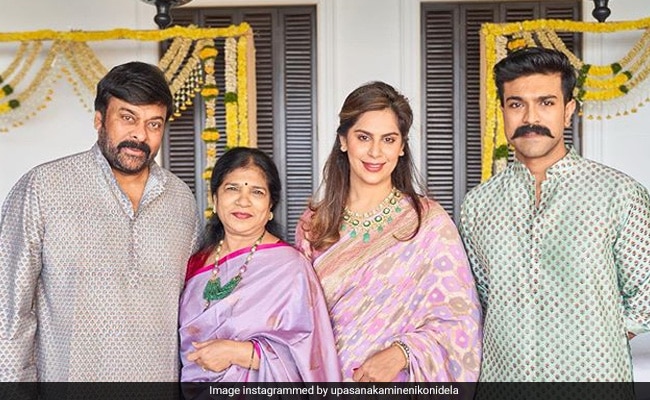 Chiranjeevi with his family (courtesy upasanakaminenikonidela)

Megastar Chiranjeevi and his son Ram Charan had a major fam-jam on the occasion of Makar Sankranti. And all thanks to Ram Charan's wife Upasana Kamineni that fans are getting glimpses of the festivities hosted by Chiranjeevi. On Thursday, Upasana shared a few of her favourite fam-jam moments from the Makar Sankranti festivities on Instagram and captioned her album as "priceless moments." The album features a perfect family photo, in which Chiranjeevi can be seen posing with wife Surekha Konidela while Ram Charan joins Upasana in the frame. For Makar Sankranti, Upasana and Surekha Konidela were colour coordinated in light purple sarees while Chiranjeevi and Ram Charan opted for matching kurtas. Family goals, eh? In the following pictures, Upasana poses with other family members for photos.

A post shared by Upasana Kamineni Konidela (@upasanakaminenikonidela) on Jan 15, 2020 at 11:18pm PST

Chiranjeevi's daughter Sreeja Kanuganti also added a few family photos to the collection. She shared photos of "dad-daughters" and "brother-sisters" having a blast on Makar Sankranti.

Ram Charan had already wished his fans on Makar Sankranti with a blockbuster photo earlier, which featured not only dad Chiranjeevi but also Ram Charan's cousins Allu Arjun, Allu Sirish, Varun Tej and Sai Dharam Tej and others. "Happy Sankranti," he captioned the photo. Here's the crazy viral photo shared by Ram Charan.

On the work front, Chiranjeevi was last seen in the much talked-about Sye Raa Narasimha Reddy in 2019, which also starred Amitabh Bachchan in a significant role. Meanwhile, Ram Charan will next be seen in SS Rajamouli's RRR, the ensemble cast of which also includes Jr NTR, Ajay Devgn and Alia Bhatt. RRR is expected to release in July this year.