Maharani Review: A passable account of a state fighting steady decline and seeking regeneration, and of an undervalued woman waging her own personal war. 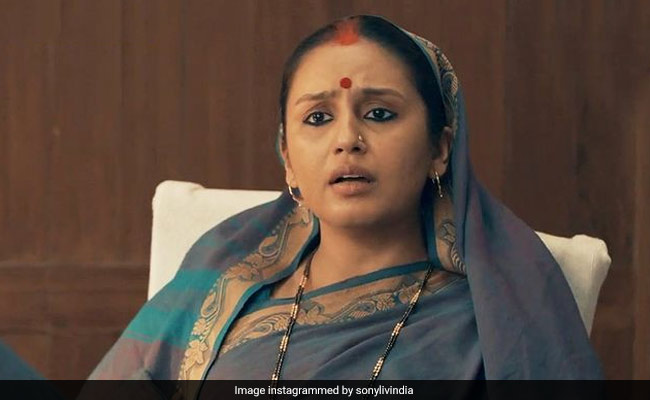 Maharani Review: Huma Qureshi in a still from the show (courtesy sonylivindia)

A woman's perilous, arduous journey through the minefield of late 1990s Bihar politics is at the core of Maharani, a new ten-episode SonyLIV series. It could well have been titled Scam 1998 because that is what a large part of the show is about - a major corruption case that threatens to bring down a government.

Inspired by actual events, if not historically real people, the slow-burning, intermittently intriguing political drama, scripted by show creator Subhash Kapoor and Nandan Singh with dialogues by Umashankar Singh, benefits immensely from a slew of unwaveringly effective performances by a Huma Qureshi-led cast that is up to the challenge of plugging the gaps that abound in a tale of ambition, betrayal and blood feuds.

The insights are often perfunctory, the writing patchy, and the spotlight on the workings of democracy rather uneven. Yet, Maharani, riding on a dense plot that derives its twists and turns from newspaper headlines of a couple of decades ago, is a passable account of a state fighting steady decline and seeking regeneration, and of an undervalued woman waging her own personal war.

One undeniably positive aspect of Maharani is the restrained pitching. It never turns shrill for the sake of thrills no matter how bitter the confrontations and how sharp the battle lines become. All the credit for this must accrue to director Karan Sharma, the writers, and the actors.

Maharani projects politics, as Bollywood does oftentimes, as a chessboard on which the King calls the shots and the pawns play by rules set by others. It, however, puts a feminist spin on the cliched construct by placing a Queen at the heart of the mind games the politicians play with each other and with their usually unsuspecting electorate.

The principal pieces in the power tussle are a CM, a CM's political adviser, a CM-in-perpetual-waiting, a governor who is more than a mere constitutional head, a senior police officer, an honest-to-a-fault bureaucrat, an upper caste militia chieftain, a Naxalite rabble-rouser, and a spiritual guru with his hand in the cookie jar. Around these people orbit sundry players whose job it is to keep the severely compromised system running in return for crumbs thrown at them.

The lady is a novice in every sense of the term. She cannot read or write (although later in the series she reveals that she had a few years of primary school education). She makes a complete hash of the oath-taking ceremony. Her Officer on Special Duty Kaveri Sreedharan (Kani Kusruti) stands by her like a rock as rustic woman gradually evolves into a politician with a mind of her own.

The process is neither smooth nor instant. Pressures mount on her from all directions. The assailants who tried to take her husband's life have to be brought to book. The investigation spearheaded by the state DGP Siddharth Gautam (Kannan Arunachalam) hangs in the balance. The state's law and order situation is precarious. At one of the spectrum is the upper-caste ideologue Rameshwar Mukhiya (Alok Chatterjee) and his hitman Kunwar Singh (Sushil Pandey); at the other is the Naxal leader Shankar Mahto (Harish Khanna), equally ruthless in his ways.

Maharani Review: A still from the show

As she gains in confidence, Rani Bharti begins to run afoul of not only the Opposition, led by an ambitious Navin Kumar (Amit Sial), an old college mate and now staunch rival of Bheema Bharti, but also from elements within the party and her home, where her grievously wounded husband, an old-world patriarch who believes his wife is duty-bound to do his bidding, recuperates.

Maharani, shot principally in Bhopal and Jammu, straddles roughly five months - from October 1998 to (presumably) February-March 1999 - but not once does anybody broach the need for Rani Bharti being to win a byelection in order to continue in office. That isn't the only major lacuna in the plot. Several other arbitrary and facile details are added to the storyline with an eye on upping the ante - none rings true.

Least of all a scene in which Madam Chief Minister barges into Raj Bhavan after midnight and buttonholes the Governor (Atul Tiwari) - he has been in the saddle for well over a decade and knows the ins and outs - to explain to her what is going on in Bihar. In the course of the conversation, the state's constitutional head announces, with pauses at the right places, that "Bihar is not a state. It is a state of mind." Apart from the fact that the line is anything but original, its utterance to a woman from the backwaters who knows nary a word of English makes little sense.

As Rani Bharti settles into the hot seat, she stumbles upon a massive scam related to animal husbandry department purchases made from non-existent suppliers on the basis of fake allotment orders and bills. This mirrors the infamous fodder scam but is described as the "seeds scam".

The CM instructs finance secretary Parvez Alam (Inaamulhaq), a Bengali-born officer, to get to the bottom of the truth. As Rani fights for survival in the cesspool of politics, Parvez Alam goes all out to expose the network of corruption that runs all the way up to the top echelons of the government.

Maharani Review: A still from the show

At the centre of a cast swelling with accomplished actors, Huma Qureshi is equal to the task. She makes a fair fist of a gamut of emotions, expressing them all, even when the writing isn't at its best, with impressive conviction. She brings poise and quiet power to the role of a reluctant politician who fights her own inhibitions - and a panoply of social and political constraints - to stay afloat.

Maharani would have done well to give Kani Kusriti more prominence as the Malayali IAS officer who handholds the political greenhorn through her first days in office. The duet of the two women in an otherwise male-dominated show (a measure, no doubt, of the gender imbalance in the domain it depicts) deserved greater investment. Kusruti's Hindi diction and the way she translates every English word she uses in the presence of Qureshi's character are delightfully quaint.

Sohum Shah and Amit Sial, neither has much range to play with, deliver pitch-perfect performances. Inaamulhaq, who first appears towards the end of the fourth episode, takes no time to make his presence felt. Veterans Atul Tiwari, Harish Khanna and Bhopal-based theatre guru Alok Chatterjee, among others, lend the series solidity on the acting front.

In the manner of most such web shows that aim for binge-worthiness no matter what, Maharani culminates at a point where the ground is ripe for another season. The winners and losers of the first round have their task cut out in the next outing. The winner will have to protect the turf won after a tough battle; the loser will have reason to regroup and fight back. It might be worth the wait.