Mahaakshay Chakraborty was granted anticipatory bail on July 7, because of which his wedding was postponed 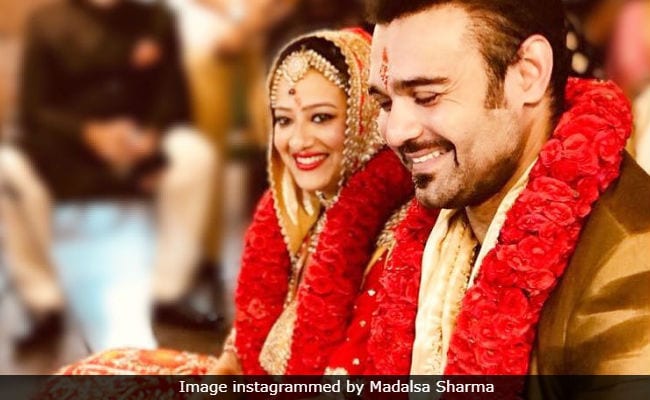 Mithun Chakraborty's son Mahaakshay, who is also known as Mimoh, married actress Madalsa Sharma in Ooty on July 10 and Madalsa's actress mother Sheela Sharma told Mumbai Mirror that the ceremony "went off smoothly." The wedding was initially scheduled for July 7 but because of the case against Mahaakshay and his mother Yogita Bali, the ceremony had to postponed till they were granted anticipatory bail. Sheela told Mumbai Mirror that Mahaakshay and Madalsa registered their marriage on July 7 but the wedding ceremony took place on July 10. "Both Mimoh and Madalsa are really happy and so are the families. With everyone's blessings, everything went off smoothly," she was quoted as saying.

After the wedding ceremony, Mahaakshay shared the news on Twitter with a few pictures:

An FIR was lodged pursuant to court's order on the complainant of a woman who alleged that Mahaakshay had cheated and raped her. The plaintiff also accused Mithun Chakraborty's wife Yogita Bali of threatening her of "dire consequences if she continues the relationship," reported new agency PTI. Meanwhile, Sheela Sharma refuted the allegations made against her son-in-law and said that te wedding was never called-off. She told Mumbai Mirror: "No cops came calling, all that was reported was just rumours, we are shocked that anyone could write such things... I reiterate that all the allegations against Mimoh are false."

Speaking about her association with the Chakrabortys, Sheela said: Sharmas "My husband's (filmmaker Subhash Sharma) first film after passing out from FTII, Tere Pyaar Mein, which released in 1978, had featured Mithun Ji as the hero. Bappi (Lahiri) da had given the music for it. So, we go back a long way. They are a respectable family, and anyone would be proud to be a part of their family," said Sheela.

Mahaakshay debuted in the industry in 2008 film Jimmy and he went on to star in films such as Enemmy, Loot and Haunted - 3D. He was last seen in 2015's Ishqedarriyaan.