Madhuri Dixit "Still Loves This Look" And So Do We 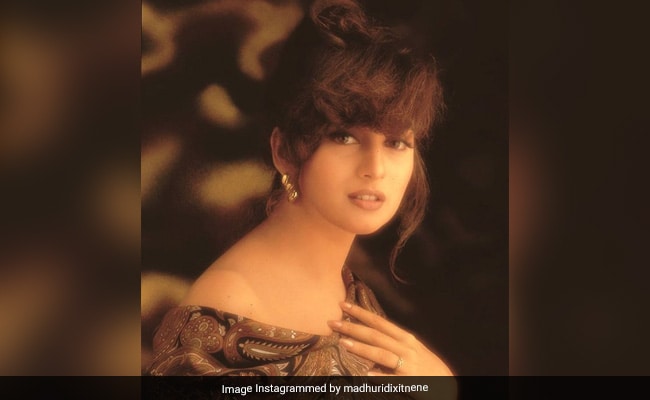 Madhuri Dixit is a bone-fide fan of throwback pictures and she proves it every now and then. The 51-year-old actress took a trip down memory lane and fished out a throwback picture of herself and it wouldn't be wrong to say that the blast from the past is worth "pause and rewind." In the photo, Madhuri looks gorgeous as she poses for the camera. The actress did not reveal when the picture was taken but it appears to be from a photoshoot of sorts from years ago. Sharing the picture on social media, Madhuri Dixit captioned it: "I still love this look! #PauseAndRewind." Take a look at Madhuri Dixit's Instagram post here:

I still love this look! #PauseAndRewind

Madhuri Dixit frequently delights her fans by sharing priceless throwback pictures from her pitara. Be it an old picture from one of her films' sets or one from her late Nineties or early Twenties photoshoots, she looks stunning in all of them. Don't you agree? We have handpicked a few of her throwback pictures for you, you can thank us later:

There's no one like YOU, and that's your biggest power! #PauseAndRewind #ThrowbackThursday

#BlackAndWhiteStories Living every day with love, grace & gratitude is a spiritual experience!

The vision to see, the faith to believe and the will to do will take you anywhere you want to go. #throwbackthursday

On the work front, Madhuri Dixit is best-known for her performances in films such as Devdas, Koyla, Hum Tumhare Hain Sanam, Dil To Pagal Hai, Dil, Beta, Anjaam, Dedh Ishqiya and Gulaab Gang among others. She was last seen in Karan Johar's Kalank, in which she co-starred with Alia Bhatt, Varun Dhawan, Sanjay Dutt, Sonakshi Sinha and Aditya Roy Kapur. Madhuri will soon be making her digital debut with Netflix's upcoming series, which will be produced by Karan Johar.

We're Doing Fine, Kajol. How About You? See Her Throwback Pic