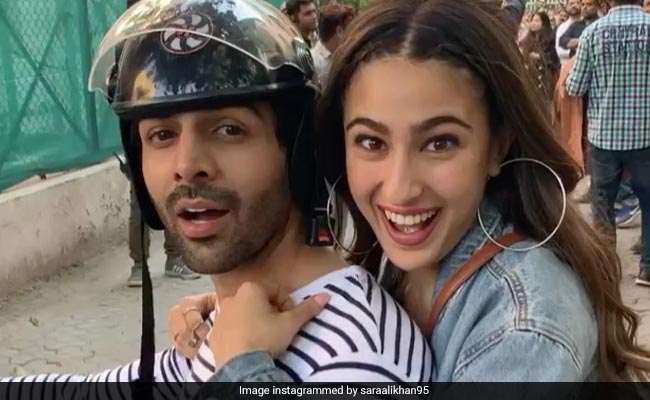 Sara and Kartik in a still from the video (courtesy saraalikhan95)

We have been seeing a lot more of Sara Ali Khan and Kartik Aaryan together these days, courtesy their upcoming film Love Aaj Kal. The trailer of Imtiaz Ali's Love Aaj Kal released last week and has fans hooked onto the duo's on-screen loved-up moments in the romantic drama. Meanwhile, a new track Shayad from the film Love Aaj Kal released on Wednesday. Sara Ali Khan took to Instagram and shared a boomerang video featuring Kartik Aaryan. In the video, Sara and Kartik can be seen sitting on a bike as Sara holds onto Kartik.

The 29-year-old actor, who keeps teasing Sara on social media, interestingly commented, "Helmet kahan hai, madam?". But Kartik's attempt at trolling Sara backfired as the Kedarnath actress replied: "You stole mine." In the video, only Kartik can be seen riding with a helmet on.

Sara Ali Khan has captioned the post, "Zoe and Veer sitting on a bike. Both so different but expressions alike. Their excitement and enthusiasm is hitting a spike. Both hoping Shayad helps love chords to strike."

Here's how cute she looked:

Kartik Aaryan had earlier talked about date night plans with Sara Ali Khan. He revealed that the two of them would spend Valentine's Day together watching Love Aaj Kal. The movie releases on the same day.