Let This F.I.R. Actress Teach You How To Ace The "Swimsuit Game"

On Kavita Kaushik's post, the general sentiment was - "amazing" 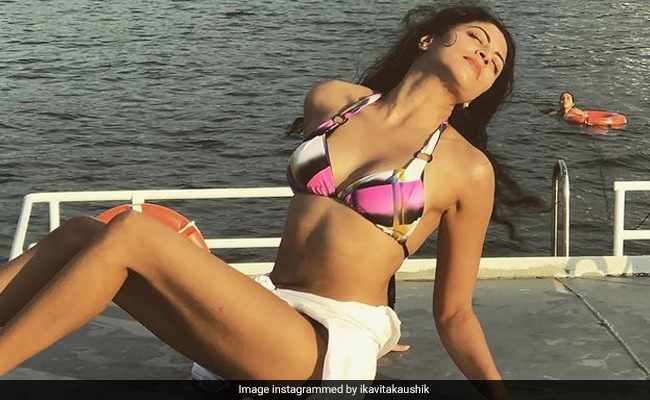 Actress Kavita Kaushik is here to teach you all how to ace the "swimsuit game." The 40-year-old actress, on Wednesday, raised the temperature on Instagram by posting a stunning picture of herself. In the photo, Kavita Kaushik looks gorgeous basking in the sun on what appears to be a cruise. Her swimsuit - in the shades of white, pink and black - makes the overall frame more beautiful. "Teaching the kids the swimsuit game," the actress wrote in the caption of her post and added a purple heart icon. In the comments section on her post, the general sentiment was - "amazing."

Kavita Kaushik's Instagram feed has more pictures from her beach and bikini diaries. Some of them show her performing yoga on the beach. Like this photo, sharing which the actress wrote: "Nothing yogi like about me yet everything is, Mahadev is the yogi we all are mere wannabes, devotees, fanatics, good, bad, evil, all one. Little yogis trying to emerge from their f**k ups."

And this one, about Kavita Kaushik's "bronzed weekends."

Wow, Kavita Kaushik. You look amazing in this beach picture:

In terms of work, Kavita Kaushik is known for her performance in comedy show F.I.R. She made her television debut with the 2001 series Kutumb. The actress has also worked in TV shows like Kahaani Ghar Ghar Kii, Remix, Ghar Ek Sapna and Ye Meri Life Hai. She has also participated in reality shows like Nach Baliye 3, Nachle Ve with Saroj Khan, Jhalak Dikhhla Jaa 8 and Bigg Boss 14.