"Known You For 8,395 Din": See Sara Ali Khan's Friendship-Special Post For Her BFFs

"If you two are my friends, I'll always win," wrote Sara Ali Khan 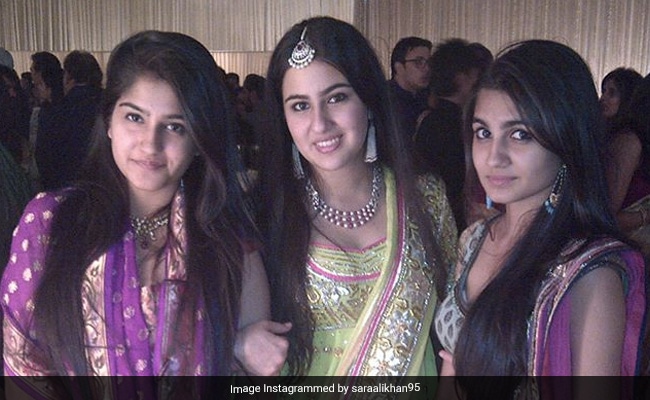 Sara Ali Khan, who is missing her BFFs Ishika Shroff and Vedika Pinto during the lockdown, dedicated her latest social media post to her childhood buddies. The actress made a trip down memory lane and picked a couple of photos of herself and her friends from their childhood, as well as teenage days and we can't get enough of it. Sara's friendship-special post also includes her ROFL shayari, in which she made it clear that Ishika Shroff and Vedika Pinto's friendship means a lot to her. Making a hilarious reference to her pre-transformation look, Sara wrote: "Through thick and thin (literally), known you for 8,395 din." The actress added that she will "always win" with her friends by her side: "Thick as thieves, close as kin. If you two are my friends, I'll always win." The album also comprises one of the recent pictures of the trio.

Through thick and thin (Literally ) Known you for 8,395 Din.. Thick as thieves, close as KinIf you two are my friends I'll always Win @ishroff @vedikapinto

Sara Ali Khan has been treating her fans to a lot of priceless pictures from her throwback pitara. Just a couple of days ago, the actress celebrated Mother's Day by sharing a picture from the time when she was an infant. The photo also features her mother, actress Amrita Singh, and her late grandmother (Amrita Singh's mother) Rukhsana Sultana.

A day later, she posted a picture collage featuring her recent photograph juxtaposed with her mother's black-and-white image. "Happy Mother's Day, Mommy. My epitome of strength and definition of best," she wrote in the caption.

On the work front, Sara Ali Khan made her Bollywood debut with Abhishek Kapoor's Kedarnath in 2018. She has since then appeared in two films - Simmba and Love Aaj Kal. She has Coolie No 1 and Atrangi Re in the pipeline. She will feature alongside Varun Dhawan in Coolie No 1 while Akshay Kumar and Dhanush will share screen space with her in Atrangi Re.

"The Only Time Ibrahim Was Scarier" Than Sara Ali Khan