Khushi Kapoor seems to be enjoying some quality time by the beach in her new photos. 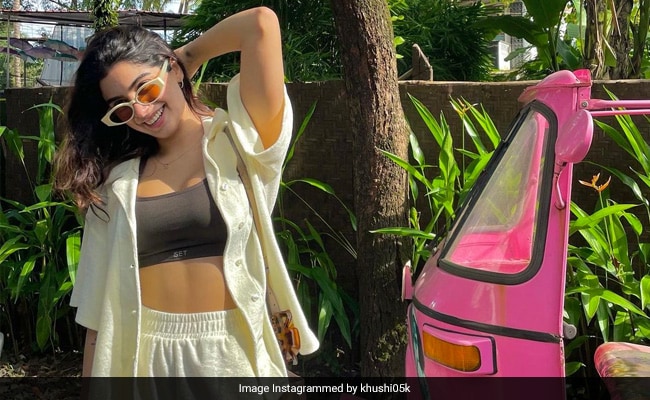 Khushi Kapoor is the Internet's darling. With candid pictures and witty one-liners, Khushi knows just to keep fans and followers hooked to her Instagram timeline. Now, she has given fans a look at what she calls her “happy place”. While she did not name the location, the pictures show a sunny place with several palm trees and a beach in the distance. What caught our eye, however, was a bright pink rickshaw that the fashionista posed next to. Dressed in a co-ord set and shades, Khushi looked ready to spend some time by the beach. Sharing the photos, Khushi Kapoor wrote, “My happy place,” with a sun emoji.

Fans and followers left heart emoticons in the comments. Take a look at the images here.

Recently, Khushi Kapoor shared some stunning pictures of herself that wowed almost everyone. Dressed in a green cardigan, she wrote, “Waiting for sweater weather.”

Showing us her witty side, Khushi Kapoor had shared a photo from inside a car and made a hilarious observation about car selfies. “Is there anything more embarrassing than making eye contact with people while taking car selfies,” she wrote.  Responding to the photo, her friend, Navya Naveli Nanda wrote, “Haven't understood this at all.” Shanaya Kapoor said, “Calm before the storm.”

She also shared another image of herself enjoying some quality time in the pool with her pet dog for company. Dressed in purple swimwear, Khushi Kapoor looked her fashionable best. She captioned the post, “Pool day.”

Khushi Kapoor is the younger daughter of actress Sridevi and producer Boney Kapoor. Actress Janhvi Kapoor is her sister.