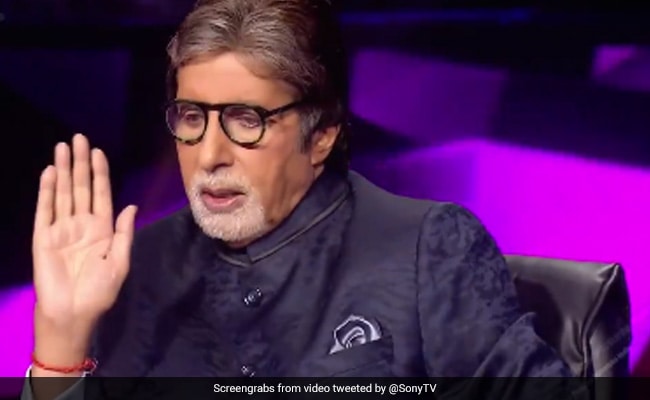 Big B on the sets of Kaun Banega Crorepati 13. (courtesy Sonytv)

In tonight's episode of the TV quiz show Kaun Banega Crorepati 13, Amitabh Bachchan began the game with Pranshu Tripathi, 28, a resident of Umariya, Madhya Pradesh. He works as a teacher in a local government school and teaches Mathematics to the students of 9th and 10th grade. He's also a cricket enthusiast, aspired to become a cricketer but his father urged him to pursue cricket as a hobby and not as a career. He admires cricketer Rohit Sharma, so much that he carries Rohit's photograph in his wallet. In a segment of the show, Pranshu had a fanboy moment. He met Rohit Sharma through a virtual call, wherein the cricketer signed his cricket gloves for Pranshu. During the course of the show, Big B teased him about his girlfriend, who he plans to marry soon. Pranshu had revealed that he would save the winning amount for his wedding.

Here are a few questions asked on tonight's episode of Kaun Banega Crorepati 13:

What is the coloured part of the eye called?

Who among these has been a Lok Sabha member from Bhopal and also the chief minister of Madhya Pradesh?

According to Hindu Scriptures, who among the following was born in Satyuga?

Which of these rivers does not originate from present day Madhya Pradesh?

The Indian army has recently named one of its military firing ranges located in Gulmarg, Jammu and Kashmir, after which Indian actress?

Which US president coined the term United Nations?

What is the longest mountain range on Earth, either on land or underwater?

Disha Parmar Is Busy "Sea-zing The Day" In Maldives