Karisma Kapoor and Salman Khan have co-starred in several films 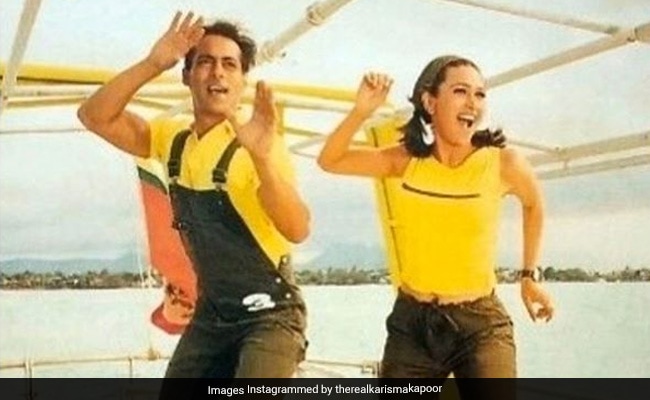 Karisma Kapoor's throwback game is stronger than yours and her latest Instagram entry proves it. The actress, who is a bone-fide fan of throwback pictures, shared a blast from the past with her fans on Friday, which also features Salman Khan. In the photo, the stars can be seen twinning in yellow outfits on what appears to be a boat. Sharing the picture, Karisma Kapoor didn't mention much about the picture or where it was taken but it appears to be from one of her movies' sets. She even asked her fans to guess the film's name and indirectly gave a little hint that the picture is a still from one of her songs. How, you ask? Well, she wrote in her caption: "Mood. Guess the movie and song?"

Now, check out this amazing throwback photo of Salman Khan and Karisma Kapoor:

Dulhan Hum Le Jayenge also starred Paresh Rawal, Anupam Kher and Om Puri in pivotal roles. The film revolves around the story of Sapna (played by Karisma), who falls in love with Raja (Salman Khan). To get the permission to marry Sapna, Raja tries to please Sapna's three eccentric uncles (played by Paresh, Anupam and Om Puri). The romantic comedy has been directed by David Dhawan.

On the work front, Karisma Kapoor was last seen in 2012 film Dangerous Ishhq. She has also made special appearances in Bombay Talkies and Zero after that.