Taimur looks adorable in a blue tee and orange shorts 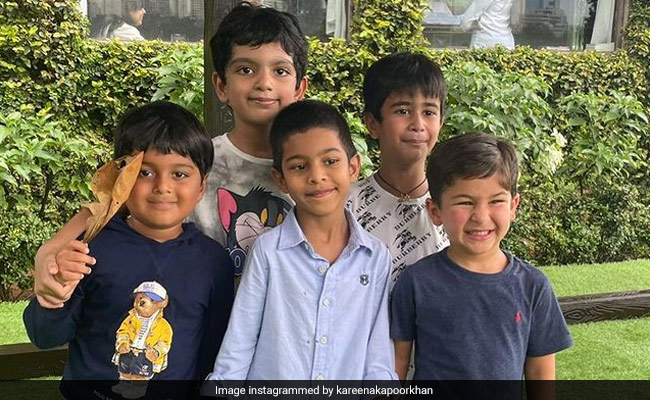 We all know about Kareena Kapoor and Tusshar Kapoor's friendship and now it seems, their sons Taimur and Laksshya, respectively, also share the same bond. On Wednesday, Kareena Kapoor posted two photos of her son Taimur and Tusshar's son Laksshya happily posing with their friends before leaving for their road trip. For those who don't know, Taimur and Laksshya were born in the same year - 2016 - so were their other friends in the photos. Sharing the photos, Kareena Kapoor wrote: "Road trip ready" and went on to thank the restaurant where they stopped by before the trip, "Thank you for the best time, as usual, Gallops Restaurant, my favourite place."

Check out the adorable photo of little Taimur and Laksshya here:

Laksshya and Taimur, who have attended each other's birthday parties a couple of times, have also gone on playdates together in the past.

Talking about Kareena Kapoor and Tusshar Kapoor, the duo have worked together in many films. Some of them are Golmaal Returns, Golmaal 3, Golmaal Again, Jeena Sirf Merre Liye, Mujhe Kucch Kehna Hai and Halla Bol.

Tusshar Kapoor's son Laksshya was born via surrogacy on June 1 in 2016.

Recently, in an interview with Times Of India, Tusshar Kapoor said that he decided to become a single parent because he was "ready" and that he "won't share his kid with anybody in the world right now or even in the future."