Karan Johar, Hilariously "Body Shamed" By Roohi And Yash, Is On His Way To The Gym 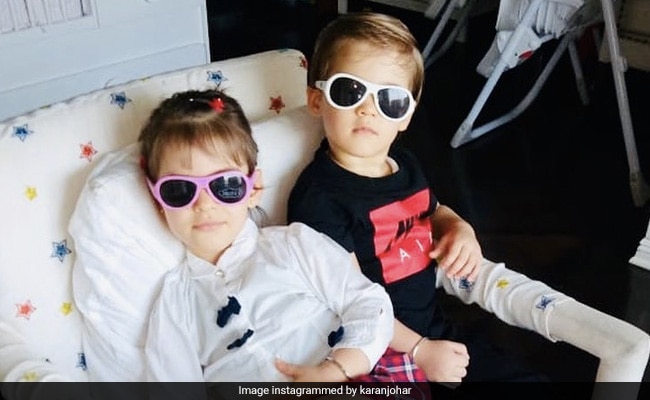 The lockdown has resulted in multiple videos of Roohi and Yash on Karan Johar's Instagram. The 47-year-old filmmaker, who has been filling up his feed with adorable moments featuring his twins, added one more to the list. KJo's videos are proof that only Roohi and Yash can match up to their dad's sass level. "I have been body shamed," Karan captioned his new video and we'll just tell you why. He appeared to interrupt Roohi and Yash's lunch by asking them what they are eating when the little munchkins appeared amused by something else - Karan Johar's "tummy."

"Wow, you guys are having lunch!" said Karan and got this in response: "You have a tummy," said Yash with a straight face. "So, I should not eat because I have a tummy? Why are you guys being so mean?" KJo can be heard saying out loud while both Yash and Roohi start giggling.

Looks like Roohi and Yash's favourite pass-time during the lockdown is to have fun with their "dada." Previously, they were busy critiquing KJo's priced possessions in his closet. Then they even shifted the focus to their grandmother Hiroo Johar and called her a "spider" for no fault of hers. "Delirium has hit us all," Karan Johar described Roohi and Yash's lockdown mood in one of his posts. Meanwhile, Roohi and Yash also think that Shah Rukh Khan lives inside KJo's closet.

Delirium has hit us all! #lockdownwiththejohars #toodles

A random snack time! And the focus has now shifted to mama! Do watch till the end #lockdownwiththejohars

In the closet for now!!! And they have an opinion!!! #lockdownwithejohars

Karan Johar became a single parent when Roohi and Yash were born via surrogacy in 2017.

Actor Kiran Kumar Is Coronavirus-Positive And "Quarantined At Home"