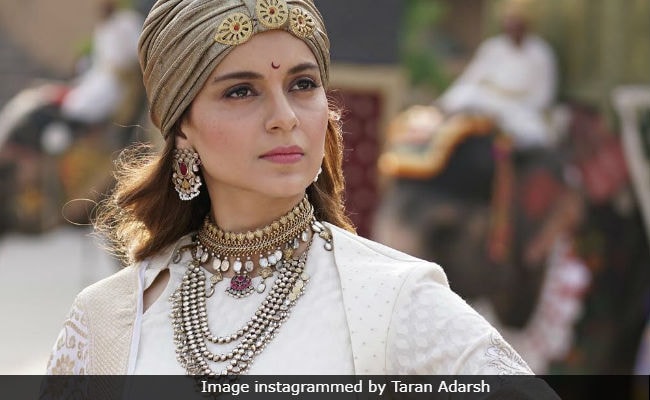 Kangana Ranaut's latest film Manikarnika: The Queen of Jhansi is a success story which Bollywood trade analysts swear by. The film made close to Rs 50 crore in four days of its release despite poor reviews (NDTV's Saibal Chatterjee gave the film 1-star rating) and the controversy about the film's directing credits. "It's a Herculean task well achieved," trade analyst Girish Johar told news agency IANS and added Kangana's job was to 'draw the audience to cinemas, in which she succeeded.' Kangana Ranaut's last few films - Katti Batti, Simran and Rangoon - did not perform well at the box office, which meant that the success of Manikarnika was crucial for the actress.

When asked if Manikarnika is Kangana's return to the box office game, industry expert Vinod Mirani told IANS: "Return? She has always been around." Kangana has also starred in commercially successful films like Queen and the Tanu Weds Manu series. "Well established stars, especially good actors don't fade out. A lot of stars like Akshay Kumar and Ajay Devgn have given a line-up of flops but they come back when a script is good," Vinod Mirani added.

"She carries Manikarnika solely on her shoulders. The film's budget is high but the ladies audience is expected to salvage it," Mr Mirani added.

Meanwhile, soon after the release of Manikarnika, co-director Krish contested Kangana's claim as the film's first director stating that 70 per cent of the film's final version was shot by him. Kangana's sister Rangoli Chandel, also her manager, tweeted that contrary to Krish's allegations, Kangana has filmed most of Manikarnika and if he can prove otherwise the actress will apologise and take back her name.

Pooja Bhatt, Bejoy Nambiar and writer Apurva Asrani, who fought with Kangana over writing credits for Simran two years ago, sided with Krish. However, Manikarnika writer Prasoon Joshi tweeted in Kangana's defence saying she "elevated the film as a director."

Actress Raveena Tandon was also impressed with the film and Instagrammed: "Directing this magnificent extravaganza seems like a challenge which you have successfully and effortlessly fulfilled." Madhur Bhandarkar, who directed Kangana in Fashion, tweeted: "Your flawless performance is captivating, intense, controlled, with sheer brilliance. You deserve all the accolades and awards for 'Manikarnika', hands down," Bhandarkar tweeted.

Congratulations @team_kangana_ranaut ,After watching the movie yesterday I am very sure this is going to bring the change in the perspective of the minds of the people that women by their own can't achieve what they dream of. The movie is a treat to watch and makes one proud that we are born of the same soil as our brave sheroes were, loved the performances by all,Directing this magnificent extravaganza seems like a challenge which you have successfully and effortlessly fulfilled. A sincere heartfelt Wish for your success as you embark on this new journey.Godbless always , love Raveena #manikarnika Styledby: @stylebysugandhasood Outfitby: @payalkhandwala Neckpiece: @minerali_store Clickedby: @ipopdiaries

Dear #KanganaRanaut you are a #OneManArmy in life & also a #OneWomanShow in film #Manikarnika.Your Flawless performance is captivating intense, controlled, with sheer brilliance. You deserve all the accolades & awards for #Manikarnika, hands down.

Manikarnika: The Queen Of Jhansi is based on the life of Rani Laxmi Bai, who valiantly fought the East India Company in the Indian Rebellion of 1857. The film also stars Ankita Lokhande, Jisshu Sengupta and Atul Kulkarni.