Kajol Asked Ajay Devgn For A Selfie And Got This Instead. His Defence

Turns out, the picture credit for this one goes not to the usual photographer in the family, Kajol's young son Yug, but... 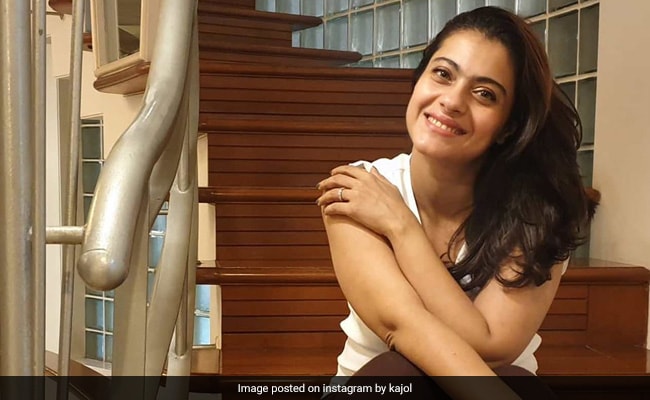 Kajol posted a picture of herself on Instagram and, while the photo itself is cute enough, what really caught our attention was the story behind it, revealed by the actress in the caption. Turns out, the picture credit for this one goes not to the usual photographer in the family, Kajol's young son Yug, but to husband Ajay Devgn. Also, she asked for a selfie - a twofie, actually, of herself and Ajay. Instead, she got a solo photo sitting on a staircase. Here's how it went down, in Kajol's words. "Me: Baby, let's take a selfie na. Hubby: Go sit there, I will take it. Me: Selfie means both of us together and someone in the picture clicks it." She ended her caption with "answer" and the finger point emoji.

Ajay Devgn responded soon after with an explanation. "My version of the selfie is usually myself behind the camera," he wrote, reposting Kajol. Just by the way, it was their anniversary a day ago - Kajol and Ajay Devgn got married on February 24, 1999.

Me: Baby let's take a selfie na Hubby: Go sit there I will take it Me: Selfie means both of us together and someone in the pic clicks it. His answer

Ajay Devgn is a reluctant selfie-taker. Take a look at what he wrote when he shared a selfie on Instagram earlier: "The things we do for love... and... marriage! Me: Let's take a selfie na... Ajay: Again?"

However, lest he be though selfie-challenged, let it be known that Ajay is perfectly capable of producing a respectable one when he wants. Proof here:

Kajol and Ajay Devgn, now married 21 years, have two children - daughter Nysa is 16, son Yug is 8. As we said, Yug is the lensman of the family and the pictures he takes are often shared by Kajol and Ajay on their Instagram profiles.

Here is some of Yug's photography:

Here is a picture of the family:

On the work front, Kajol and Ajay Devgn were last seen in the filmTanhaji: The Unsung Warrior, which has fetched over Rs 275 crore and counting. The couple have co-starred in various films including the 1994 film Gundaraj, the 1997 film Ishq, 1998's Pyar To Hona Hi Tha, 1999's Dil Kya Kare and Raju Chacha, among others.

Kajol will be featuring in an upcoming short film Devi, which has been directed by Priyanka Banerjee and releases on March 2.