Inside Suhana Khan's Graduation Ceremony With Shah Rukh And Gauri 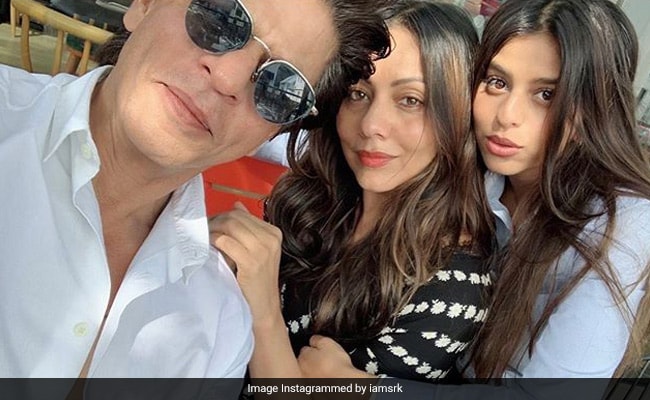 Shah Rukh Khan and Gauri Khan's daughter Suhana Khan is officially a graduate now and proud dad's excitement can be seen in his latest Instagram post, which is winning hearts on the Internet. Suhana, who frequently trends on social media, graduated from her Ardingly college in London on Friday. SRK and Gauri, who attended the ceremony, shared photos and video from the occasion, one of which also features Suhana Khan receiving "The Russell Cup for Exceptional Contribution to Drama." Sharing an adorable photo, which features Gauri Khan and Suhana, Shah Rukh Khan wrote a heartfelt note for her daughter and said that it's her first step into the real world. "Four years have flown by. Graduating from Ardingly. Last pizza... Last train ride... And first step into the real world... School ends... Learning doesn't," he wrote.

In a seperate post, SRK posted a monochrome picture with Suhana and captioned it: "Last day at school. To adding new experiences and colours to your life ahead."

Gauri Khan, on the other hand, shared a video from the ceremony, in which Suhana can be seen receiving the "Contribution to Drama" Award. But first, take a look at SRK's post, which got over six lakh likes in just an hour.

Last day at school. To adding new experiences and colours to your life ahead....

The Russel cup for exceptional contribution to drama.

In a separate post, Gauri shared a mesmerising picture of Suhana Khan from their lunch at Ardingly and Suhana is looking drop-dead gorgeous in the sun-kissed click.

Suhana is the second of Shah Rukh Khan and Gauri's three children. Her elder brother Aryan, 21, is studying films while her younger brother AbRam, 6, is studying in Mumbai's Dhirubhai Ambani International School.

Suhana, who every now and then trends for her style statement, has already featured on Vogue magazine cover and in the accompanying interview she said that she wants to be an actor. "My parents only realised I was serious about acting when they saw a performance of mine for the first time," she told Vogue.