In the photos, Alia and her friends can be seen laughing uncontrollably at what appears to be an inside joke 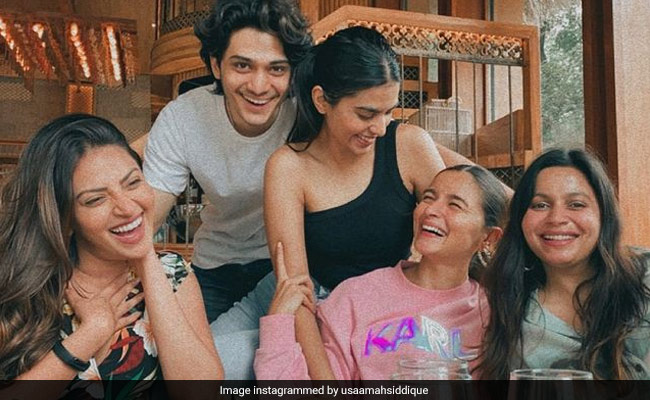 Alia Bhatt and her friends took over Mumbai on Friday. As lockdown restrictions were eased in Maharashtra, Alia Bhatt set up a date with her friends at the eatery Bastian in Mumbai's Worli on Friday afternoon. Looks like Alia Bhatt had a lot to catch up with her besties Akansha Ranjan Kapoor, Meghna Goyal and Usaamah Siddique. Alia's sister Shaheen Bhatt and Anushka Ranjan Kapoor, Akansha's sister, were also part of the brunch team. Photos from Alia Bhatt's lunch date have been shared by her friends on Instagram and fan-clubs were quick to make them go viral. In the photos, Alia and her friends can be seen laughing uncontrollably at what appears to be an inside joke. So, what's the joke, Alia Bhatt?

"Good vibes only," wrote one of Alia's friends while sharing a few brunch time memories. Here's what happens when friends catch up after a long time. Alia accessorised her brunch look with black sneakers and some gold hoops.

Alia Bhatt, known for her head-turning wardrobe choices, was cute in a pink sweatshirt, which she paired with black biker shorts.

In terms of work, In terms of work, Alia Bhatt co-stars with Ranbir Kapoor in Ayan Mukerji's upcoming movie Brahmastra. Her line-up of films also includes SS Rajamouli's much talked about RRR, in which she works with Ram Charan, Jr NTR and Ajay Devgn. RRR marks Alia Bhatt's south cinema debut. Meanwhile, Sanjay Leela Bhansali's Gangubai Kathiawadi casts Alia Bhatt as a mafia queen. The film is expected to open in cinemas on July 30 this year.