"But I am certain, when he went, he must have gone with a gentle smile," wrote Big B 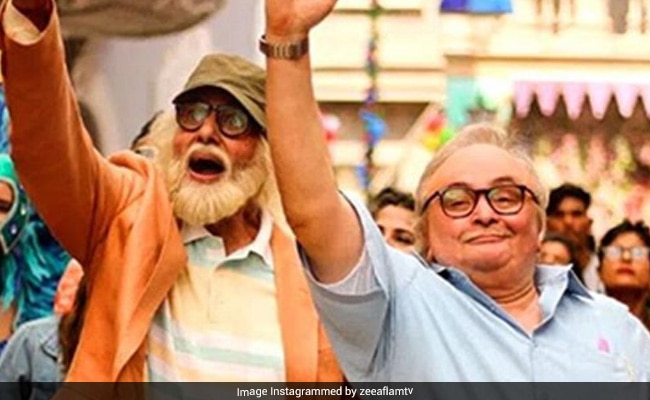 Amitabh Bachchan and Rishi Kapoor in a still from 102 Not Out. (courtesy zeeaflamtv)

The most comprehensive memorial of Rishi Kapoor came late Thursday night from the co-star who knew him best - Amitabh Bachchan. Mr Kapoor died on Thursday morning in a Mumbai hospital after losing a battle with cancer. He was 67. When he died, Amitabh Bachchan twice posted and then deleted a tweet - after the second time, the tweet stayed deleted; it was clear that Big B, Rishi Kapoor's most frequent co-star, was not yet ready to speak. At Mr Kapoor's funeral held in the afternoon, the Bachchans were represented by Big B's son Abhishek - the funeral was attended by only a very small group of family and friends to comply with the lockdown.

Much later came Amitabh Bachchan's eulogy, shared on his blog and on Instagram with a stylized illustration of Rishi Kapoor playing the dafli, capturing an iconic moment from his 1979 film Sargam.

Rishi Kapoor and Amitabh Bachchan, 77, made movies like Kabhi Kabhie, Amar Akbar Anthony and, most recently, 102 Not Out together. In his post, Big B wrote about his earliest meetings with Mr Kapoor at the family home and at RK Studios; he wrote about Rishi Kapoor's walk, his dialogue delivery, his ace lip-syncing and his killer sense of humour. Between takes, Rishi Kapoor would produce a pack of cards or a Bagatelle board, Big B wrote.

Amitabh Bachchan also revealed why he never visited Rishi Kapoor when he was in hospital. "I never wanted to see distress on his smiling cherubic face," Big B wrote in his post, "But I am certain, when he went, he must have gone with a gentle smile."

Rishi Kapoor did indeed make an exit that was typically him. A family statement after his death said that he had been his jovial and entertaining self to the end and that "he would like to be remembered with a smile and not with tears." Amitabh Bachchan's send-off for his boon companion of so many decades fits perfectly.

"I had seen him at his home, Deonar Cottage, Chembur, a young energetic, bubbly, mischief in his eyes Chintu, on those rare moments when I was privileged to have been invited to an evening at Rajji's house. I would see him more often after, at RK Studios, when he trained as an actor for his film to be made, Bobby, a diligent enthusiastic youngster, ready to pounce onto every learning that came his way, in that famous large and legendary make up room of Rajji at the end of the first floor corridor of makeup rooms.

He had a walk that was confident and determined, a stride and style that was similar to that of his grandfather, the legendary Prithvi Rajji. A walk I had noticed in one of his earlier films, that walk... I never found it in any other.

We worked in several films together. When he spoke his lines, you believed every word of it. There was never an alternative, its genuineness was beyond question. And there has never been any other that could lip sync a song as perfectly as he would, never.

His playful attitude on set was infectious. Even in the most grave sequences he would discover that comedic spark and we would all just crack up. Not just on set, if you were with him at any formal event, he would find that little distractive light-hearted gem to expand on and lighten the situation.

When there was a time lapse as the shot got readied during a shoot, he would bring out his playing cards, or at times pull out his rather complicated Bagatelle board and invite others to play. A competition, not just for fun, a serious competition.

During his time of diagnosis and his treatment he never ever lamented his condition. It was always, 'see you soon, just a routine visit to the hospital, I'll be back shortly.'

Joie de vivre, the exuberant enjoyment of life, was a gene he inherited from his father, the Legend, the Ultimate Showman, the Iconic Raj Kapoor.

I never visited him in hospital, I never wanted to see distress on his smiling cherubic face. But I am certain, when he went, he must have gone with a gentle smile."