Shruti Haasan Posts Pics From 12 Years Ago: "A Lot Has Changed And I'm Grateful"

The actress made her major debut in a Hindi film named Luck in 2009. 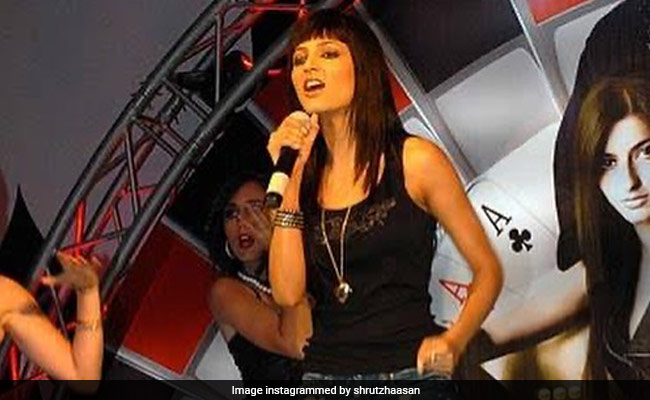 Who's having a fantabulous Saturday there? Shruti Haasan for sure. It's 12 years since the actress made her debut appearance in a Hindi film named Luck (2009). Now, she and her fans are in a celebratory mood to raise a toast to her years in the film industry. How is Shruti spending the day? She has posted her photos from the days of Luck and we can all awe at the transformation she has gone through. The actress shared a photo of her punk looks in the film and another from the days of film promotion. The first photo is from her film promotion days where she is seen singing with a mic. The photo was taken as the debutant Shruti sang and danced a number from her film for its promotion. That was how she made her major step into the film industry.

Today, her fans, who call themselves "Shrutians," vow their support to her in her future days too.

In the caption, Shruti spills forth her joy. She wrote, "12 years ago today, I had no idea what I was getting into. All I knew was that I liked it and I wanted to get better every day; I still feel that way. A lot has changed and, for that, I am so grateful."  She added to it with a token of gratitude for her fans and followers, "Thank you for all the love and support. I have a special place in my heart for you. I feel truly blessed. Onwards and upwards every day feels like a new journey has just begun."

As her fans began to applaud her performance over the years, Shruti couldn't help but share another video to thank them all. She also posted some of her follower's Instagram posts or videos where they celebrated 12 years of her career.

There's enough reason for her fans to love Shruti so much. The actress is also a talented singer and her deep vocals can send a chill down our spine. She misses her live performances and here's how we know it:

Her love for music can overwhelm many of us. But she can also add a lot of fun to her singing sessions by compiling a video of her struggles during her 2 am singing sessions. Here's the video we're talking about:

Shruti is a power-packed ball of talent and fun and she has shown it all along. We wish her all luck for her upcoming projects as well.