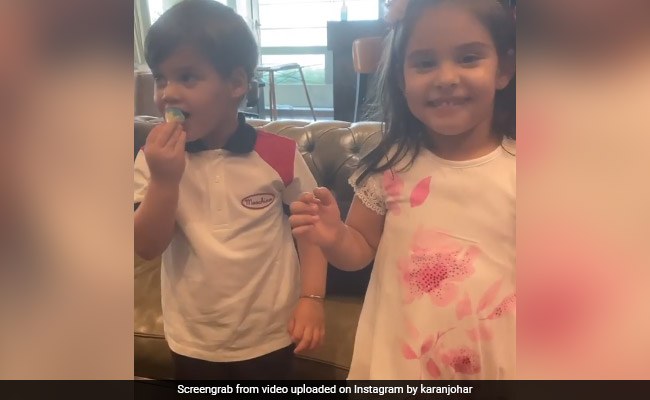 Happy birthday, Karan Johar! On Monday, filmmaker Karan Johar celebrated his 48th birthday in the most cutest way possible - with his kids Yash and Roohi and mother Hiroo Johar. Giving his Instafam a glimpse of his birthday celebrations in lockdown, Karan Johar shared an adorable video of Yash and Roohi blowing the candles on his birthday cake. Adding to his series "lockdown with the Johars," KJo shared a sneak peek of "birthday love" received by him. In the video, Yash and Roohi can be seen blowing the candles while KJo, who is in charge of the camera, and Hiroo Johar can be seen singing "happy birthday to dada" for KJo. KJo can be heard asking Yash and Roohi if he can have the cake, to which they say, "No." When KJo asked why, Yash and Roohi hilariously say, "You'll become fat." Sharing the adorable video of his birthday celebrations with family, KJo wrote, "Birthday love." He also added the hashtags "lockdown with the Johars" and "toodles" to his post. Take a look:

Within minutes of posting, KJo's video was flooded with comments and birthday wishes from his friends and fans. Reacting to the video, Sara Ali Khan dropped cake emojis to KJo's post, while Maheep Kapoor commented with heart emoticons.

KJo seems to be having the most fun with his twins at home. A few days back, KJo got called a "monkey" by Yash. In the hilarious video, KJo can be heard referring to Yash as a monkey, to which he reacts saying that he is "Yash bhaiya" and Roohi says that she is "Roohi didi," to which KJo asks them, "Then what am I?" Yash hilariously answers KJo saying that he is the monkey. "Ok I have a new name now," KJo captioned the video. Take a look:

Here's what KJo is up to with his lockdown shenanigans - Yash, Roohi and his mother Hiroo Johar:

In Pics: How Shah Rukh Khan's Work From Home Scene Looks Like