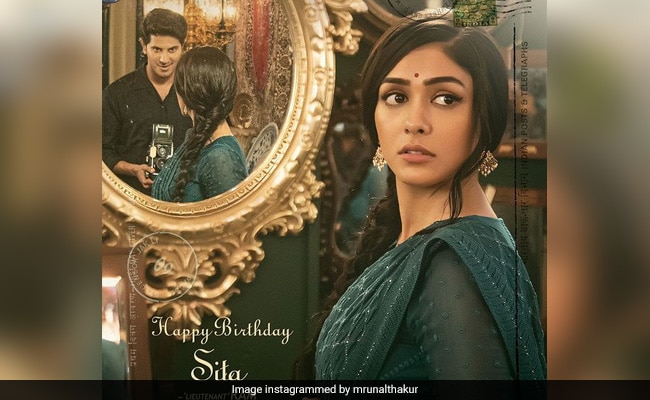 First, happy birthday, Mrunal Thakur. The actress turned 29 today and treated her fans to the first look poster of her character Sita from her Telugu untitled film. The film which has been tentatively titled as Production No. 7, features Dulquer Salmaan and Mrunal Thakur in the lead roles. While Dulquer Salmaan plays the role of lieutenant Ram, Mrunal Thakur plays the role of his love interest Sita. Mrunal shared the first look poster of her character on Instagram as a "gift" to her fans on her "special day." The poster features Mrunal standing in front of a mirror, while we also see Dulquer Salmaan in the reflection of the mirror. She looks as gorgeous as ever dressed in a green saree. Mrunal Thakur wrote: "Here's a gift from me to you on my special day! Here to conquer your hearts with the lovely Dulquer Salmaan." Mrunal's post received scores of comments from her fans who dropped heart emojis in the comments section of the post.

Take a look at Mrunal Thakur's first look from the film here:

Earlier in the week, the first look poster of Dulquer Salmaan's character was dropped by the makers of the film. The poster was released on the Dulquer Salmaan's 35th birthday. Sharing the poster with his fans on Instagram, Dulquer revealed that the poster is a gift from the film's makers to him. "Thank you thank you thank you to everyone for the overwhelming love and birthday wishes! Here's a little birthday gift from my producers," he wrote in the caption of the post.

Check out Dulquer Salmaan's first look from the film here:

Production No 7 will be produced by Vyjayanthi Movies and Swapna Cinema. The film will mark Dulquer Salmaan's second Telugu project after the 2018 movie Mahanati. The yet untitled film will also release in Malayalam and Tamil.