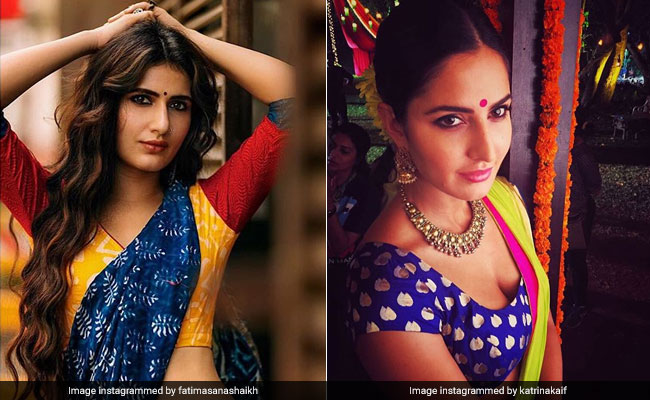 New Delhi: Actress Fatima Sana Shaikh's latest Instagram post - a picture of herself in a brightly coloured sari, hair in long waves and a bindi - has been closely scrutinised by the Internet. Verdict - she looks a lot like Katrina Kaif, social media has decided. It's true that Fatima's pose is rather Katrina-like. It's also true that she's near unrecognisable as the wrestler from Dangal, where her hair was cropped and her outfits sporty. Fatima Sana Shaikh and Katrina Kaif are co-stars in work-in-progress film Thugs Of Hindostan, opposite Aamir Khan and Amitabh Bachchan, so we'll have plenty of opportunity to judge them on the similarity of their looks, or lack thereof. Meantime, this picture of Fatima Sana Shaikh has been inundated with comments telling her she looks like Katrina:

Here's Katrina in the same sort of primary colour and bindi getup:

And her pose is kind of similar here:

Fatima's supposed resemblance to Katrina hasn't been commented on this previous 'picture of the picture' post:

Do you see it? Tell us in the comments if you think Fatima and Katrina look alike.

Fatima Sana Shaikh, 25, was a model and child star (she appeared in Kamal Haasan's Chachi 420) before being cast in Aamir Khan's acclaimed 2016 film Dangal, a retelling of how Haryanvi wrestler Mahavir Singh Phogat trained his daughters Geeta and Babita in his sport. Fatima played Geeta, actress Sanya Malhotra was cast as Babita.

Thugs of Hindostan, partly filmed in Malta, is expected to release next November.

Katrina Kaif will be seen on screen much sooner - in just a few weeks, in fact. She stars with Salman Khan in Tiger Zinda Hai, a sequel to their hit film Ek Tha Tiger. Katrina is also working on a film with Shah Rukh Khan and Anushka Sharma, her co-stars from Jab Tak Hai Jaan.
Comments
fatima sana shaikhkatrina kaif