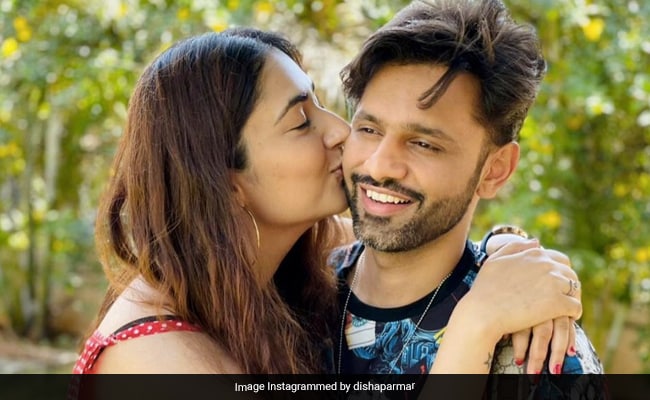 Singer Rahul Vaidya is hopelessly in love with his girlfriend, actress Disha Parmar. And their social media accounts are witness to it. The couple has been sharing mushy pictures of one another ever since the singer proclaimed his love for Disha on the reality show, 'Bigg Boss', last year. Not one to shy away from expressing her love, the 28-year-old, too, recently uploaded a photo of the couple on Instagram. Sharing two images, the actress wrote on Friday, "Mickey & Minni." The first photo shows Disha planting a kiss on Rahul's cheek as he smiles. The second has them both posing and smiling for the camera.

While Disha looked cute in a red skater dress, Rahul was seen wearing a printed shirt. The couple's casual look was well-received by fans. The photos fetched Disha and Rahul a unanimous "cute couple" tag. One user commented, "What a lovely couple."

The two also recently appeared together in a song 'Madhanya' and portrayed the roles of a newly-married couple. Following the positive feedback to the song, Disha and Rahul have been treating fans with special Instagram Reels of their performance to the track.

In one such video, Rahul can be seen going down on one knee in front of Disha. Along with the clip, he wrote, "Real ke saath Reel. #Madhanya getting soooo much love! Thank you guys," tagging the actress.

Sharing a behind-the-scenes video from the shoot of the song, Disha wrote, "Extremely delighted to see the response coming from you guys ... Keep making your reels on the 'Wedding Song of the Year' and tag us!"

Rahul proposed to actress Disha on her birthday while he was a contestant on 'Bigg Boss 14'. She also visited him on the show to convey her consent.

Mouni Roy Almost Outshines The Sunset In These Stunning Pics