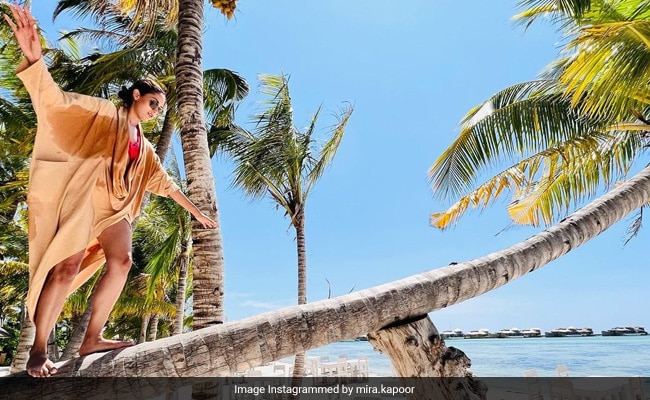 You heard it here first: Mira Rajput has the coolest Instagram profile on the Internet. And before you even think of disagreeing, we recommend you cast a glance at her timeline. Mira Rajput has been in the Maldives for the past several days with her husband, actor Shahid Kapoor and she is winning the social media game with some stunning pictures. And, while she treats us to all the dreamy shots of the sunsets and the blue waters, Mira Rajput also believes in keeping it real. Now, the diva has shared a bunch of pictures with the caption, “Don't wanna be cool. Can I just chill? Bare feet all day every day.”

And if you are wondering why she chose this caption for her post, we have to tell you that she is climbing a tree in the pictures. Barefoot, Mira Rajput can be seen standing on the coconut tree that is growing more horizontally than vertically in the first picture. In the next two slides, Mira Rajput moves further along, only to plonk herself and lie down on the tree almost hugging it. With the blue waters and the clear sky, this has to be one of the cutest frames on the Internet today.

On Thursday, Mira Rajput shared a video of herself going for a swim in the blue waters. She is looking fresh as a daisy in her red swimsuit. She wrote in the caption, “Getting that dose of Vitamin Sea. Take the plunge with me,” and added the hashtag “water baby”.

And, the ample photos on her timeline are proof that she loves the beach. Sharing a pic of herself flashing a million-dollar smile, Mira Rajput wrote, “Beach Bum. Literally haven't got off it since.”

And, the “water baby” that she is, Mira Rajput found a way to exercise on the beach as well. She uploaded a video of herself performing Surya Namaskar on the beach. An excerpt from the note attached to the clip reads, “Sometimes I like to go with the flow and figure out my own set of movements often staying in them for what FEELS good. It's that connection and the intuition, that helps one to heal.”

She further explained, “This was a Surya Namaskar series I did just after sunrise, and I felt so energised. We hear about saluting the Sun, but this time I felt the energy. Bare feet, grounded in the sand and the sound of the waves. Somewhere, in between inhale and exhale, you'll find yourself.”

Mira Rajput and Shahid Kapoor have been married since 2015. They have two children, Misha Kapoor and Zain Kapoor.