"Wonder what the reaction would have been if it had been released today," Milind Soman wrote in his caption 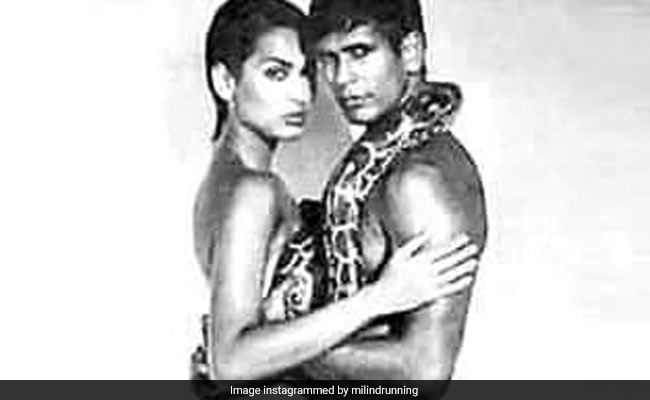 Milind Soman, who started his career as a model in 1988, had a major nostalgic moment on Instagram. The 54-year-old actor-model Instagrammed a black-and-white memory of the controversial advert he featured in with former girlfriend Madhu Sapre in 1995 and wrote he is curious about how the Internet would have reacted if the photoshoot was done in present times. Milind Soman and Madhu Sapre posed nude for the print advert for Tuff shoes, with a python wrapped around them and Tuff shoes being their only accessories. Deemed as too sensational, the release of the advert snowballed into a controversy with two cases registered against the creators of the advert and the publishers of the two magazines which featured it.

"Keep seeing this pop up on my timelines every once in a while. It's 25 years old. At that time, no social media no internet either I think! Wonder what the reaction would have been if it had been released today," Milind Soman wrote while sharing the throwback photo.

Keep seeing this pop up on my timelines every once in a while :) its 25 years old, at that time no social media no internet either I think ! wonder what the reaction would have been if it had been released today . . . #flashback #timelapse #blackandwhite #nude #photo

In response to Milind Soman's curiosity, the Internet showered his post with as many as over 1,380 comments. "This picture was probably the first time I heard of fashion and fashion models in India," read a comment while another added: "I got to know that someone like you existed only coz of this pic". "I was way young that time and heard your name for the first time for this picture. Guts," said another user while the general sentiment on Instagram was that the advert is still "iconic."

Milind Soman had earlier shared this photo on his Instagram, dated 1991: "Throwback Thursday. The Ridge, Delhi, 1991."

1995 is also the year Milind Soman featured in Alisha Chinai's Made In India music video. Milind Soman also featured in his first TV show A Mouthful of Sky that year. He forayed into Bollywood in 2000 with Tarkieb. Milind Soman is married to Ankita Konwar. He was last seen in Amazon Prime web series 4 More Shots Please!.