Christmas 2020: Ananya Panday Is Excited About Her "Favourite Time Of The Year." See Pics 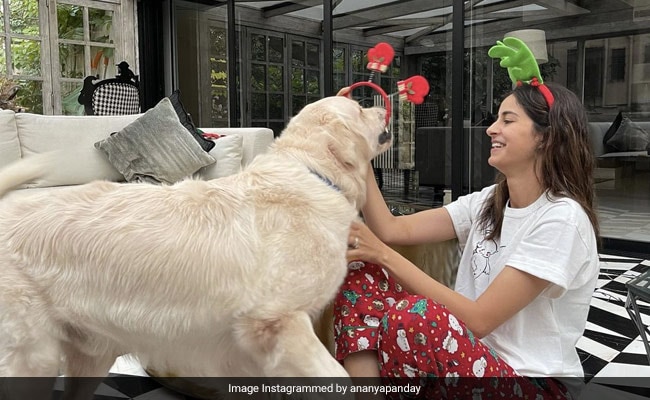 It's Ananya Panday's "favourite time of the year" again. The actress is pretty excited for the Christmas season and her excitement spilled onto Instagram in the form of an adorable post. Ananya, on Wednesday, shared a couple of pictures of herself playing with her pet pooch using Christmas props. In one of the pictures, Ananya Panday, dressed in a white t-shirt and Christmas-special pyjamas, can be seen laughing her heart out while in another, she can be seen looking at the camera. "One of us has definitely been naughtier this year... #FavouriteTimeOfTheYear #TisTheSeason," she wrote in the caption with a Santa Claus and a Christmas tree icon.

Ananya was in Dubai last Christmas, vacationing with her friend. Check out pictures from her trip here:

Ananya Panday is the daughter of actor Chunky Pandey and Bhavana.

In terms of work, Ananya Panday made her Bollywood debut with Student Of The Year 2, in which she shared screen space with Tiger Shroff and Tara Sutaria. The film was the sequel to 2012's Student Of The Year. She was next seen in Pati Patni Aur Woh, co-starring Kartik Aaryan and Bhumi Pednekar. The film flopped at the box office. Ananya's last film is Khaali Peeli, in which she co-starred alongside Ishaan Khatter. She has a couple of films lined-up now. Ananya Panday will next be seen in a film opposite Vijay Deverakonda (directed by Puri Jagannadh), as well as in Shakun Batra's romantic drama alongside Deepika Padukone and Siddhant Chaturvedi.