"Brothers Who Play Together...": Shah Rukh Khan's Comment On Pic Of Aryan And AbRam Wins The Internet

Gauri Khan shared an image that received a bunch of responses from Bollywood stars. 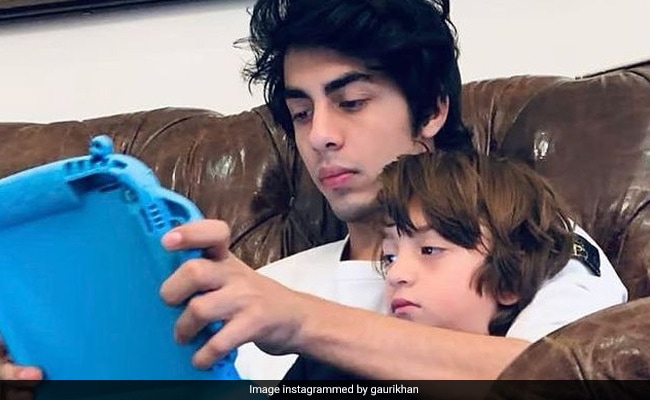 Gauri Khan is a proud mother. The interior designer and producer is a mother to three children whose pictures she loves sharing on Instagram. On Tuesday, Gauri Khan shared an image of her sons Aryan Khan and AbRam Khan bonding over video games. Calling it a “boys night out” in the caption, Gauri Khan posted the adorable frame and tagged Aryan. Gauri's superstar husband Shah Rukh Khan could not stop himself from commenting on the image. He wrote, “Games are the new “bonding” force…Brothers who play together, I guess, stay together.” Given Shah Rukh Khan's penchant for video games and sports, we are not surprised that his sons too are bonding over games.

Here's the image that has sent Shah Rukh Khan fans into a tizzy.

The doting parents often share images of their children on Instagram. Previously, Gauri Khan had shared a pic of AbRam Khan wearing boxing gloves. The caption has our hearts. She wrote, “My Mike Tyson,” referring to the boxing legend.

Shah Rukh Khan too had shared a snap from one of AbRam's birthday celebrations, in which the little one is seen alongside Suhana Khan and Aryan Khan. Sharing the image, SRK wrote, “Another sweet picture from AbRam's birthday party.”

Now, take a look at this one featuring the sibling trio.

And, who can forget this lovely image of AbRam reading a book with mom Gauri Khan? “All grown up, AbRam's reading this book himself,” Gauri Khan wrote in the caption.

Shah Rukh Khan and Gauri Khan have been married since 1991. They became parents to Aryan in 1997, while Suhana was born in 2000. The couple welcome AbRam in 2013 through surrogacy.