Bigg Boss 14: All the housemates were asked to stay in the garden area 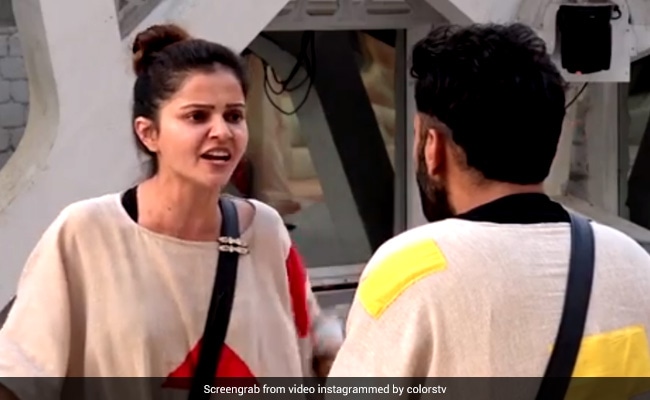 Bigg Boss 14: Rubina and Rahul in a still from the show. (courtesy colorstv)

In tonight's episode of the TV reality show Bigg Boss 14, all the inmates were seen fighting for basic necessities. After all the captaincy tasks were halted by all the contestants, Bigg Boss decided to punish them by introducing another task, as a part of which they had to earn basic necessities like food, using the furniture. The contestants woke up to the tunes of Its The Time To Disco, after which the task was introduced. During the task, the housemates were divided into two teams - red team and yellow team. The red team was headed by Rubina Dilaik and it counted Abhinav Shukla, Rakhi Sawant, Vikas Gupta and Devoleena among its members. The yellow team's leader was Rahul Vaidya and it comprised Arshi Khan, Nikki Tamboli, Aly Goni and Sonali Phogat. As a part of the task, all the contestants had to stay in the garden area and a point had to be deducted from their team if they went indoors. The winning team would be given the opportunity to purchase eatables from the BB Mall.

In another segment of the show, Rubina Dilaik got into an intense fight with Rahul Vaidya. He got angry at Rubina after her teammate Vikas Gupta hid the essentials box. Rubina schooled her team and decided to move forward. During the task, Rahul Vaidya commented on Rubina Dilaik and Abhinav Shukla's relationship, which made Rubina more furious. Rubina too made a remark about Rahul Vaidya's girlfriend Disha Parmar, who he had proposed during the TV show last year. Rahul asked Rubina not to drag her in the game. He said that Abhinav and Rubina are part of the show, while she isn't.

Arshi Khan blocked the way to the washroom for the opposing teams. Nikki Tamboli, who was in Aly Goni's team, decided to root for her friend Rubina Dilaik, who was in the opposing team. She lied to Rahul Vaidya about using the washroom and then went on to do her make-up and used more units of the house. Aly Goni  said that he is missing Eijaz Khan, who had to leave the show on Monday's episode due to his prior commitments. Devoleena entered the show as Eijaz Khan's proxy in the show. Meanwhile, Vikas Gupta too got back in the game. During the task, a burger, some french-fries were placed in the house and each food item was worth three units. Nikki Tamboli went inside and ate a plate, which deducted 3 points from her team.