Baap Re Baap! Can You Guess The Number Of Akshay Kumars In This Film? 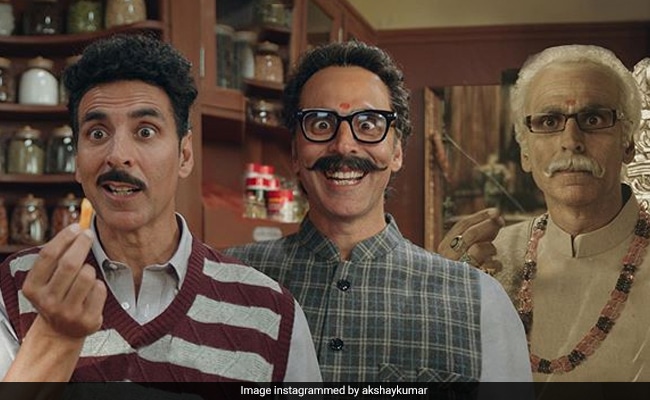 Akshay Kumar just added a new film to his impressive line-up - a cent-per-cent Bollywood entertainer titled Baap Re Baap. Akshay Kumar shared just a glimpse of his new film with a photo featuring the character... scratch that... characters he plays in Baap Re Baap. Akshay Kumar's photo appears to reveal that the actor represents three generations in Baap Re Baap as the photo features not one, not two but three versions of Akshay Kumar. The first Akshay in the photo appears to be the youngest of the lot, followed by what appears to be his father and then grandfather. The three Akshay Kumars pose against a backdrop of a grocery store. Here's how Akshay described his new film: "Ek se bhale do, do se bhale teen... (Two is better than one, three is better than two). Baap Re Baap."

Ek se bhale do, do se bhale teen...Baap Re Baap, A Masaledaar entertainer coming your way soon. Watch out ! #BaapReBaap

On his work-roster, Akshay Kumar has Rohit Shetty's Sooryavanshi, with which he forays into the director's world of cop films. Akshay co-stars with Katrina Kaif in the cop drama. Next up, he has Laxmmi Bomb, in which he plays a character, who is scared of ghosts but is eventually possessed by the spirit of a transgender. Akshay also plays the titular role in Prithviraj, a period piece based on Prithviraj Chauhan. He co-stars with Manushi Chillar in the movie, which marks her Bollywood debut. Akshay Kumar also has Bachchan Pandey, which is said to be loosely based on Ajith's 2014 Tamil action film Veeram, lined up for 2021. Akshay Kumar has also been reportedly cast in Dhoom 4. He also stars in Dhanush and Sara Ali Khan's new film Atrangi Re.