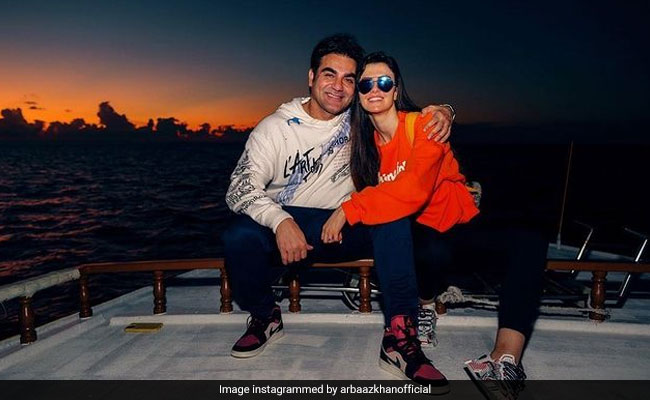 Actor Arbaaz Khan and his girlfriend Giorgia Andriani are on a Maldivian getaway and seem to be having a gala time. The actor-producer has shared pictures from the vacation on Instagram and we have to say it looks like one dreamy trip. In the pictures, the duo can be seen posing with the blue waters in the background. The two are also all smiles in one of the photos with the sun setting behind them. Sharing the post, Arbaaz Khan wrote, “Enjoyed our stay at the Amaya Kuda Rah...Thank you for the wonderful hospitality.”

Giorgia Andriani, too, has shared pictures from the holiday in which she looks stunning as ever. In one of the recent images, the Italian dancer and model is seen posing on a swing. Sharing the photo, Giorgia wrote, “Swinging it”.

A few weeks ago, on the occasion of Arbaaz Khan's birthday too, the couple was seen posing for some happy pictures. Sharing one such photo, Giorgia Andriani said, “Happy Birthday Arbaaz.” Arbaaz Khan responded to Giorgia's post in Italian and said, "Grazie (thank you)."

Last year during the COVID-19 lockdown, the couple was seen spending some quality time together. In a video, Giorgia Andriani shared a prank she pulled on her sleepy head beau, Arbaaz Khan. In it, she can be seen shaving Arbaaz Khan's stubble as he sleeps. The dancer gave us two options to choose from, to describe her action: "Being a barber or being barbaric!? What say?"

At the end of the video, Arbaaz even gives Giorgia a thumbs-up for her shaving skills!

Arbaaz Khan was previously married to actress Malaika Arora. The couple got divorced in 2017. They have a son named Arhaan Khan. With regards to work, Arbaaz was last seen in the film Sridevi Bungalow in a special appearance. His last full-fledged role was in 2020, in his debut Malayalam film Big Brother. He is best known for his work in the Dabangg series, Pyaar Kiya To Darna Kya and Shootout at Lokhandwala.