Akshay Kumar Spends A Day With "Bravehearts Guarding The Borders"

Akshay Kumar spent a day with the Indian soldiers 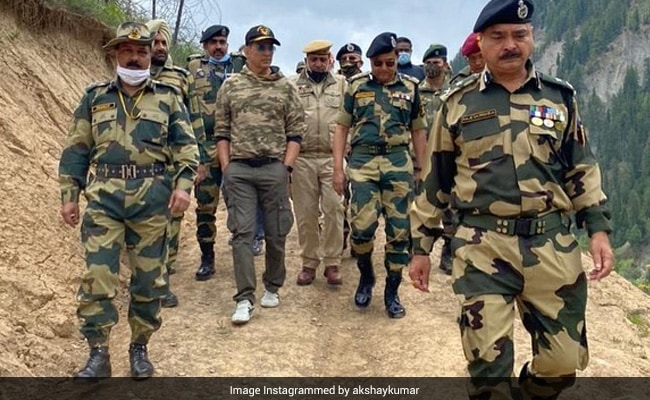 Actor Akshay Kumar, on Thursday, met soldiers of the Indian Border Security Force (BSF) and spent "a memorable day" with them. How we know this? Courtesy, Akshay's latest Instagram post. The actor visited BSF's Tulail camp in Jammu and Kashmir. He dropped several pictures of himself and the "bravehearts" on Instagram. In the pictures, we can see Akshay Kumar dressed in a sweatshirt with camouflage print on it. While two pictures capture him walking with the soldiers, another one features him dancing with them. In the first picture, Akshay Kumar can be seen posing with the "real heroes" against the backdrop of an Army helicopter. In the caption of the post, the 53-year-old actor shared his experience with his fans. "Spent a memorable day with the BSF bravehearts guarding the borders today," he wrote. "Coming here is always a humbling experience... meeting the real heroes. My heart is filled with nothing but respect," he added.

This isn't the first time that the actor has spent time with soldiers. He often visits Army camps to meet them. Earlier this year, on Army Day, Akshay Kumar enjoyed a game of volleyball with the bravehearts. He also shared a video of himself enjoying the game with the soldiers. "Had the pleasure of meeting some of our bravehearts today to flag off a marathon on the occasion of #ArmyDay and what better way to warm up than a quick game of volleyball," he wrote in the caption.

In terms of work, Akshay Kumar's upcoming film Bell Bottom is all set to release in theatres on July 27. Bell Bottom will be the first movie to release on big screens after second COVID-induced lockdown. Besides Bell Bottom, Akshay Kumar will also be seen in films like Bachchan Pandey and Atrangi Re.