"Thanks for all the love and prayers," Miya George wrote 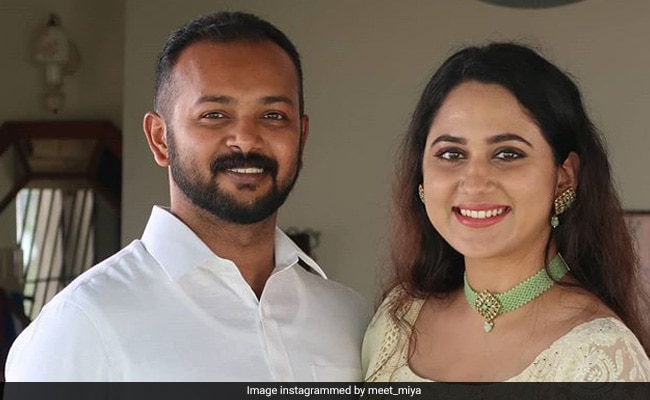 Miya George's latest Instagram post calls for congratulations. The Malayalam actress recently got engaged to businessman Ashwin Philip and shared the big news on social media on Tuesday. Miya's low-key engagement ceremony reportedly took place at Ashwin Philip's residence in Kerala with only family members in attendance. Sharing the pictures with her fiancé, the Memories actress wrote: "Thanks for all the love and prayers." Miya's fans and well-wishers flooded the comments section with congratulatory messages in no time. For her special day, the actress opted for a pastel Anarkali from the shelves of Label'M. She accentuated her look with a statement necklace and subtle earrings, while her fiancé complemented her in a white shirt and a pair of blue trousers. We also got a glimpse of Miya's engagement ring in the photograph. The 28-year-old actress will reportedly get married in September.

Miya George has starred in TV shows like Kunjali Marakkar and Alphonsamma. She entered the Malayalam film industry by starring in brief roles in films like Ee Adutha Kaalathu and Doctor Love. Miya made her debut in the Tamil film industry in 2014 with the romantic drama Amara Kaviyam. She later appeared in films like Red Wine, Memories, Vishudhan and Mr. Fraud.

Miya will next be seen in a Tamil film titled Cobra, co-starring Vikram. The thriller will be directed by R Ajay Gnanamuthu and it will also feature Srinidhi Shetty and Irfan Pathan. Miya's upcoming project also includes a Malayalam film named Kanmanilla.