A Day In The Life Of Amitabh Bachchan: Shooting In Minus Three Degrees And Quirky Eyewear

Brahmastra is a fantasy trilogy, directed by Ayan Mukerji 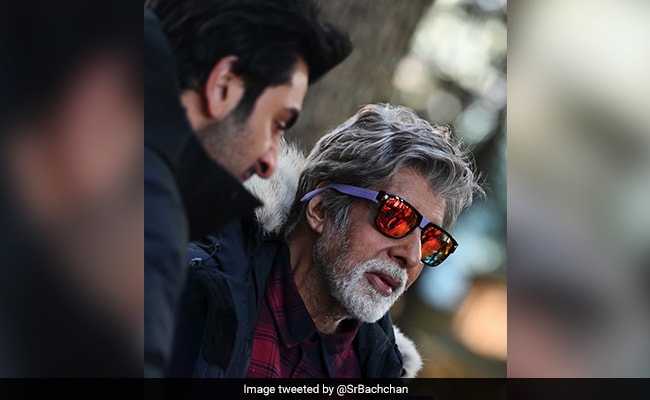 Amitabh Bachchan on the sets of Brahmastra. (Image courtesy: SrBachchan )

As winter arrives, most of us are stuck in never-ending layers of blankets, and then there is Amitabh Bachchan, who, at the age of 77, is busy working in -3 degrees (yes, you read that right). The actor, who is currently shooting for his forthcoming film Brahmastra in Manali, shared a glimpse from the sets of the film on his Twitter profile, on Monday. Big B posted a picture of himself, from the sets of the film, in which we also got a glimpse of his co-star Ranbir Kapoor. Big B wrote: "Minus degrees ... Err like -3. Protective gear and the work etiquette."

Big B's Brahmastra co-stars Alia Bhatt and Ranbir Kapoor checked into Manali last week. Pictures of Alia dressed in Himachali topi (cap) with Ranbir trended big time on social media. However, Alia returned to Mumbai over the weekend. ICYMI, this is what we are talking about:

Brahmastra is a fantasy trilogy, directed by Ayan Mukerji. Besides Big B, Alia and Ranbir, the film also stars Mouni Roy, Dimple Kapadia and Akkineni Nagarjuna in key roles. Shah Rukh Khan will reportedly make a guest appearance in the film. The first part of the film is expected to release next year. The film has been produced by Karan Johar's Dharma Productions.