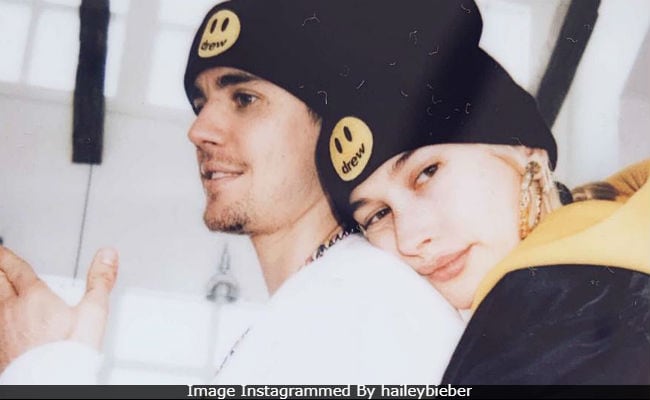 Pop star Justin Bieber's 25th birthday must have been special with wife Hailey Baldwin, who also posted a mushy post for him on Instagram. Justin Bieber turned 25 on Friday. The supermodel shared two adorable photos some hours ago to wish him and wrote, "25 sure looks good on you, lover." In the pictures, the couple complement each other in black and white casual outfits and wear similar winter caps. In of them, Hailey hugs Justin Bieber from behind and in the other, they hold each other and the couple smile for the perfect shot. Take a look at how Hailey Baldwin wished Justin Bieber.

The couple paint Instagram red by posting several mushy pictures with each other. In November, he Instagrammed a photo with a caption that read, "My wife is awesome," which soon sent the Internet into a meltdown. First, take a look at the picture here.

Justin Bieber and Hailey Baldwin reportedly married in September 2018, but it was after this post that they confirmed their wedding. In September, the couple were reportedly spotted outside a marriage registrar's office in Los Angeles. They haven't yet hosted an official wedding ceremony yet.

Justin Bieber had reportedly proposed to the 22-year-old supermodel in July last year at a resort in Bahamas. However, he made the engagement official after some days via a lengthy Instagram post. "I am so much in love with everything about you! So committed to spending my life, getting to know every single part of you, loving you patiently and kindly. My heart is completely and fully yours and I will always put you first. You are the love of my life, Hailey Baldwin and I wouldn't want to spend it with anybody else," read an excerpt from his post.

Meanwhile last month, it was reported that Justin Bieber is being treated for depression. As per an E! News report, the singer was "batting depression and was having a difficult time."

Justin Bieber is a Canadian singer and is best-known for his songs such as Baby, Boyfriend, Sorry and Let Me Love You.