1962: The War In The Hills Review - Abhay Deol Is Perfectly Cast In This Military Action Drama

1962: The War In The Hills Review: Sumeet Vyas and Akash Thosar, both cast against type, are up to the challenge. However, Annup Sonii, saddled with an underwritten role, gets the short shrift. Mahie Gill and Hemal Ingle are especially good. 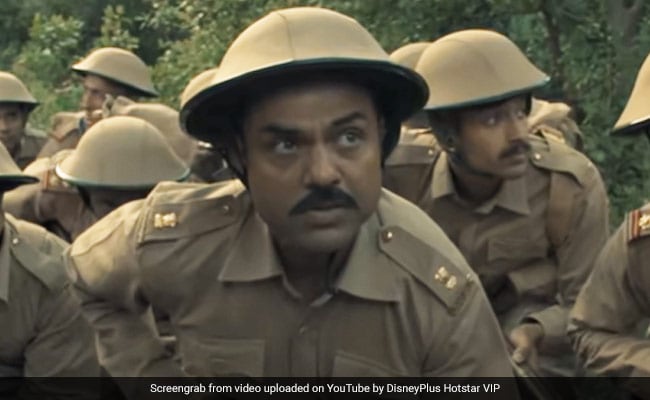 1962: The War In The Hills Review: The cast is toplined by Abhay Deol (courtesy YouTube)

An army officer's wife battles cancer without letting the strain show. A girl in love with a soldier refuses to terminate a premarital pregnancy. Another soldier's bride is widowed before her honeymoon but does no let the tragedy get to her. A spunky Ladakhi woman faces constant danger to life and limb to supply milk to army encampments in a war zone. These four ladies put the boys and their bayonets in the shade in 1962: The War In The Hills, streaming on Disney+Hotstar VIP.

They lend emotional power to parts of the ten-episode military action drama. When they aren't on the screen, the web series is at war with its own avowed intention to let the complexities of human relationships take precedence over the clinical strategies that fuel battlefield heroics. That takes the edge off the combat sequences a tad and renders them rather mechanical. The sub-plots built around women pining for peace work infinitely better.

Written by Charudutt Acharya and directed by Mahesh Manjrekar, 1962: The War In The Hills fictionalises a Sino-Indian battle from nearly six decades ago. It highlights the valour of a dauntless band of Indian infantrymen - most of them from a single village near Rewari, Haryana - while underscoring the enormous human cost of armed conflict through the stories of spirited women who keep their chins up through it all.

The cast is toplined by Abhay Deol. He is as an Army Major who leads a company of 125 Indian soldiers and, against all odds, prevents 3,000 Chinese troops from laying siege to an airstrip in the Ladakh region. The actor, not given to flimsy flourishes, imparts tangible contours to the character. It isn't just victory that the Major fights for. He seeks redemption for a blot on his career - a strategic retreat that he ordered in NEFA in order to save his boys - and himself - from the jaws of death.

Deol receives significant support from Mahie Gill, Sumeet Vyas, Akash Thosar, Hemal Ingle and others. Despite their best efforts, sustained highs elude 1962: The War In The Hills. The story takes quite a while to arrange the key pieces. Even after that is done, the haze around the multiplicity of narrative strands does not lift instantly.

It is June 1962. Major Suraj Singh (Deol) is posted in Baramulla, where he lives with his wife Shagun (Mahie Gill) and preteen daughter Neelam (Sammaera Jaiswal). The clouds of war are hovering on the horizon. The major and his battalion are in readiness to confront marauding Chinese forces. Soon the village sees off all its able-bodied young men.

After the 2020 Galwan Valley clash, Shagun Singh, now a doddering old woman, narrates the saga of the battle at Rezang La (in the film the place is Saksha La). Using her voice isn't a great idea. For one, you wonder how she could have been privy to so much classified information. And two, it is a giveaway: we know Shagun's 'terminal' illness, which she conceals hides from her husband until her hands are forced, isn't going to kill her.

Another choice that the series makes - the village is completely shorn of its cultural and linguistic specificity - considerably undermines its impact. The makers declare at the outset that the Chinese characters in the show speak English and Hindi for the sake of easy comprehension. While that, at a stretch, is probably acceptable, Haryanvi villagers speaking Hindi with accents not rooted to the milieu robs 1962: The War In The Hills of authenticity.

The Rewari boys, the keys ones, have their own arcs. Kishan (Akash Thosar), son of a ghasiara (grass-cutter), is in love with Radha (Hemal Ingle), a school teacher's daughter. The latter's elder sister Jaya (Pallavi Kulkarni) is married to the village headman's elder son. The pramukh's younger son Karan (Rohan Gandotra) requests his sis-in-law to convince Radha to marry him. That translates into a love triangle involving two army men and a heartbreak.

Ram Kumar (Sumeet Vyas), a hot-headed soldier, is a single father to a motherless boy who has a special bond with Padma (Pooja Sawant). Complications arise when the man who Padma weds, the simple-minded Gopal (Satya Manjrekar), marches off to war on the nuptial night. Their marriage remains unconsummated. On the battlefield, an impetuous, spur of the moment act drives a wedge between Ram Kumar and Gopal's elder brother Hardham (Vinit Sharma). Another case of two men at loggerheads. Again, a woman, much more sorted than the men, holds the balance.

Not only does humble milkwoman Rinpa (Rochelle Rao) help the Indian soldiers in ways that go beyond her trade, Indira Gandhi (Geetika Vidya Ohlyan), who was 45 years old in 1962, is written into the show offering significant inputs when Jawaharlal Nehru (Arif Zakaria), who isn't referred to by name, presides over tense war room meetings. The Prime Minister lets his grip on his emotions slip when disconcerting reports trickle in from the war. The daughter - she isn't named either - steps up to proffer sage advice.

In the main, 1962: The War In The Hills, for better or for worse, steers clear of the usual genre tropes. It celebrates the tricolour and the bravery of Indian soldiers all right, but the war cries are rarely as belligerent as they usually tend to be in such re-enactments. An elaborate version of Vande Mataram plays on the soundtrack as Indian soldiers trek to the inhospitable terrain they have to defend. You cannot help thinking that the war drama could have done with less music.

While a handful of the Chinese soldiers - one of them is called Ug Lee (Liao Meng Chi) - it's pronounced ugly so that nobody is left in any doubt - are inevitably ruthless, their commander, a suave officer in uniform played by Meiyang Chang, is a thorough gentleman who never wavers from the path of fair play.

In a war drama, the men inevitably get more of the footage. Abhay Deol is perfectly cast. Sumeet Vyas and Akash Thosar, both cast against type, are up to the challenge. However, Annup Sonii, saddled with an underwritten role, gets the short shrift. Mahie Gill and Hemal Ingle are especially good. Pooja Sawant, Pallavi Kulkarni and Rochelle Rao, too, make their presence felt.

The depiction of the titular war just about passes muster. The women who embody the tragic consequences of military conflict steal the show and nudge it into an unusual orbit, making 1962: The War In The Hills far more watchable than it would otherwise have been.