In Narendra Modi's speech, Pawan Kalyan is hero, no mention of Chandrababu Naidu 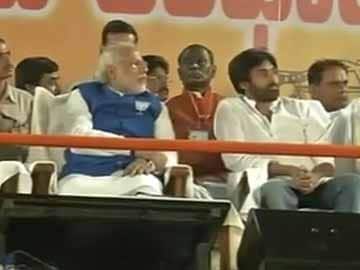 Mr Modi, the BJP's prime ministerial candidate, did not once refer to his alliance partner in Andhra Pradesh, Chandrababu Naidu or his Telugu Desam Party, asking Telangana to vote for "the BJP and our alliance" in the state elections and at the Centre.

Pawan Kalyan, who recently launched a political party, is not part of the BJP-TDP alliance in Andhra Pradesh. But he is supporting Mr Modi for PM. He is the younger brother of Telugu superstar and Congressman Chiranjeevi, who is a union minister at the Centre. (Chiranjeevi 'surprised' by brother Pawan Kalyan's meeting with Narendra Modi)

The 42-year-old star shared stage with Mr Modi in Nizamabad. "Pawan Kalyan's talk touched my heart. My soul said that if there are youth like Pawan Kalyan, the Telugu spirit can never die. Telangana and Seemandhra can both prosper under someone like him," Mr Modi said.

Of Mr Modi's four rallies in the Telangana region of Andhra Pradesh today, Mr Naidu will attend only two.

Sources said the BJP's local leaders in Nizamabad, Karimnagar and Mahbubnagar opposed Mr Naidu sharing stage with Mr Modi at the rallies there.

The TDP reportedly negotiated to get Mr Naidu invited to the Mahbubnagar rally. He will also be seen with Mr Modi at his last rally of the day in Hyderabad.

The BJP and the TDP clinched their partnership after days of negotiations last month, overriding protests from local leaders from both parties.

Through an uneasy courtship, Chandrababu Naidu has attempted to pitch the alliance as a coming together of two progressive leaders. "I want to join with Narendra Modi as both are branded as pro-development persons. Under our leadership, I am confident, we will put India on the world map,'' he said recently. ('It's rocking,' says BJP about alliance with Chandrababu Naidu)

Last week, the freshly minted alliance threatened to come apart over allocation of seats. The parties are in overdrive to resolve the issue today. (Chandrababu Naidu and BJP alliance appears increasingly fragile)

The partnership is seen as a masterstroke that could win the BJP-led NDA a rich haul in Seemandhra, the regions that will form residuary Andhra Pradesh when a Telangana state is carved out of it.