A group of researchers, who found a new species of Utricularia in Kottayam, Kerala, has named the plant as Utricularia Kamarudeenii after Dr M Kamarudeen Kunju, a botanist, teacher and environmentalist who campaigned to save the biodiversity-rich Peringamala in rural Thiruvananthapuram.

A group of researchers, who found a new species of Utricularia in Kottayam, Kerala, has named the plant as Utricularia Kamarudeenii after Dr M Kamarudeen Kunju, a botanist, teacher and environmentalist who campaigned to save the biodiversity-rich Peringamala in rural Thiruvananthapuram. Utricularia are carnivorous plants popularly called bladderworts.

S Arya, a PhD student of University College, Thiruvananthapuram, who is working under Dr VS Anil Kumar, head, Department of Botany, Government College, Kasaragod, on Amaranthus of Kerala, made the discovery during in one of her exploratory surveys in the paddy fields of Kottayam.

“While we were exploring the Kottayam region, accidentally we came across this plant and we found that this plant is something different. Then we made a thorough analysis and arrived at a conclusion that this can perform as a carnivorous species,” Dr Anil Kumar said.

“We named the plant after Dr Kamarudeen because of his contributions to the systematics – the biological classification of plants,” he said while adding that the team wanted the late botanist-cum-environmentalist to be remembered forever with this.

For naming a plant after a person should be in accordance with certain rules and according to Dr Anil Kumar, Dr Kamarudeen life and vision suited all criteria.

“The newly discovered plant was named after late Dr Kamarudeen Kunju, former Reader Department of Botany, University of Kerala, Karyavattom, who was a dedicated teacher, an enthusiastic environmentalist and most importantly a very much lovable person. He showed us the relevance of biodiversity and its conservation through his untiring activities,” says Ms Arya who knew Dr Kamarudeen for the past 7 years whom she calls an inspiration and driving force behind her interest in plant systematics. 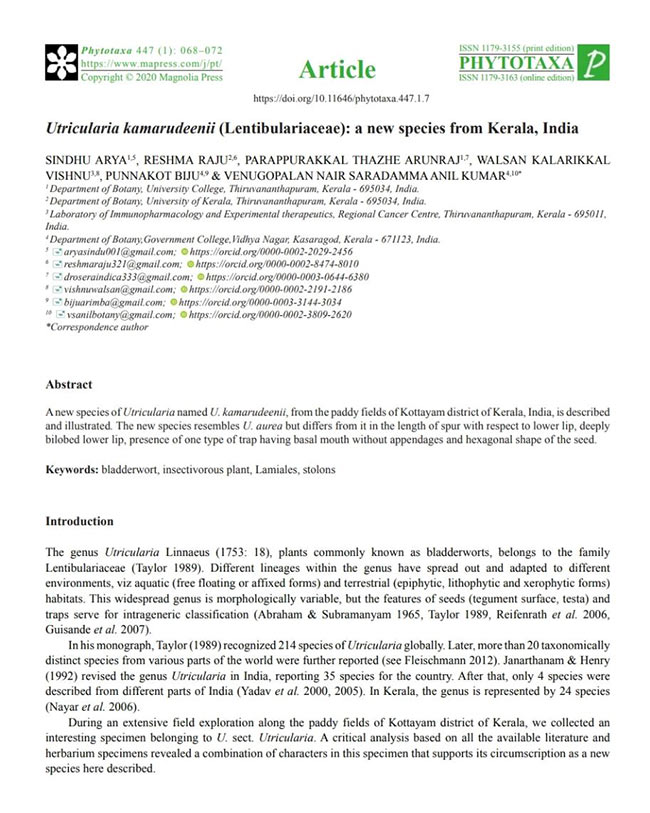 Phytotaxa, an international journal on plant taxonomy, has published the findings in its latest edition.

“His contribution to plant science being a botany professor and people's scientist is commendable and worth remembering. Though his untimely departure incited unfathomable sorrow to all those who know him, we decided to permanently etch his name on to the plant science by honouring him with aptly naming a newly discovered plant after him , as it would be an inerasable mark in plant science,” she added.

Dr Kamarudeen had worked for 11 years in his Alma matter Iqbal College in Peringamala before joining Kerala University’s Botany department.

Born in a traders’ family in Muttom, Alappuzha, to Peedikayil Muhammad Kunju and Haleema Beevi, he led a people’s movement in Peringamala to preserve the biodiversity of the region before his untimely death in 2019.

He had completed his schooling from his native Haripad and pre-degree from MSM College, Kayamkulam.

He had also worked at prestigious, Tropical Botanical Garden and Research Institute, Palode.

He was a rank holder in LLB and LLM and received many awards and recognition for his efforts.

“Being a hardcore environmentalist, he always kept his eyes open to any misdeed towards the nature and stood for protection of the forest cover and its diverse life forms. When the Government of Kerala decided to establish a waste plant at his own Peringammala Panchayath, an IUCN recognized biodiversity hotspot; he left no stone unturned to make the authorities rethink. The people in the area thankfully remember his restless efforts for nature conservation," he added.

National Children Science Congress: Project Of Students From Tribal Jawhar To Be Presented