The Patna High Court had quashed a National Council for Teacher Education (NCTE) decision to render in-service teachers who earned their D.El.Ed from NIOS ineligible for regular appointment to primary schools.

On May 20, Union Human Resource Development Minister Ramesh Pokhriyal ‘Nishank’ announced that the National Council for Teacher Education, or NCTE, will allow D.El.Ed courses by the National Institute of Open Schooling (NIOS) or any other institute recognized by the council.

Previously, in his webinar for teachers, Mr. Pokhriyal had said that the issue of D.El.Ed teachers will be addressed soon.

On May 14, Pokhriyal announced that the government will respect the Patna High Court order on the NIOS D.EL.Ed teachers.

“A letter of assurance has been issued to the Additional Chief Secretary, Education Department, Bihar Government. D.El.Ed degree holders will now be able to apply for the posts of teachers,” Mr. Ramesh Pokhriyal ‘Nishank’ added.

Online D.El.Ed. course was started by NIOS on October 3, 2017 when the deadline for implementing the Right to Education Act 2009 was extended to allow over 11 lakh untrained but employed teachers to get the requisite teaching certifications.

But the NCTE, which regulates teacher training in India, later ordered that in-service teachers who had obtained their D.El.Ed qualification from NIOS would not be eligible for regular appointment as teachers in primary schools. 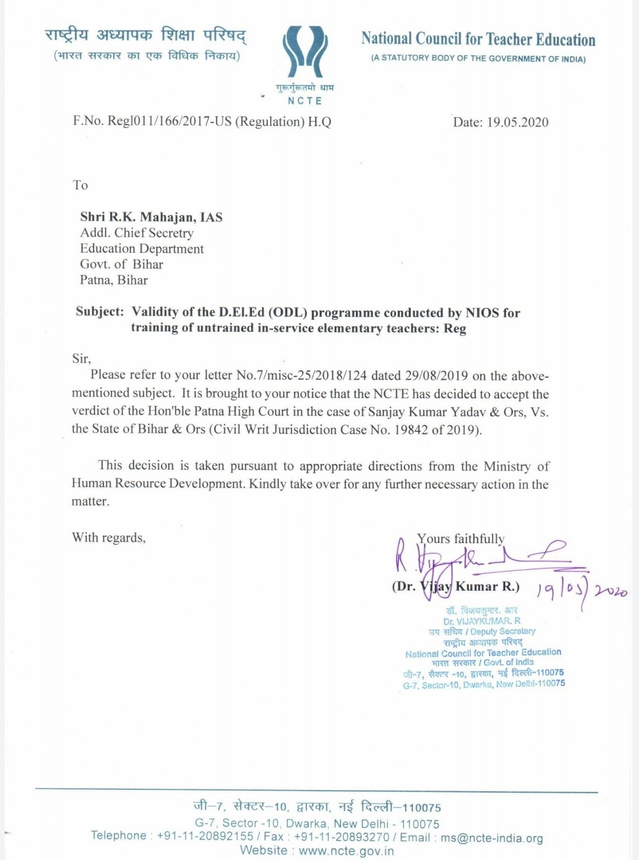 COVID 19: Colleges And Universities To Remain Shut In West Bengal Till June 30