SaveDehingPatkai: Gauhati University Students Campaign To Save ' Amazon Of The East ’

The campaign by Eco Club, Gauhati University, aims to spread awareness and protect the rainforest from any future damage.

The campaign has been organized by Eco Club, GU, and it aims to spread awareness about the future of the wildlife sanctuary through “social media movement.”

Recently, The National Board for Wildlife, or NBWL, permitted Coal India Limited to carry out extraction in 98.59 hectares of the rainforest’s land. Many fear that it will completely destroy Dehing Patkai, which is also known as ‘Amazon of the East.’

“Illegal mining has already damaged the rainforest. Recently, NBWL has permitted Coal India Limited to start extraction in 98.59 hectares of land at Dehing Patkai in Saleki-- an Elephant Reserve area. It will completely destroy the Sanctuary,” Postgraduate Students’ Union (PGSU) of Gauhati University said in a statement.

“Post #SaveDehingPatkai in your social media accounts. Together we can save Dehing Patkai,” the statement added. 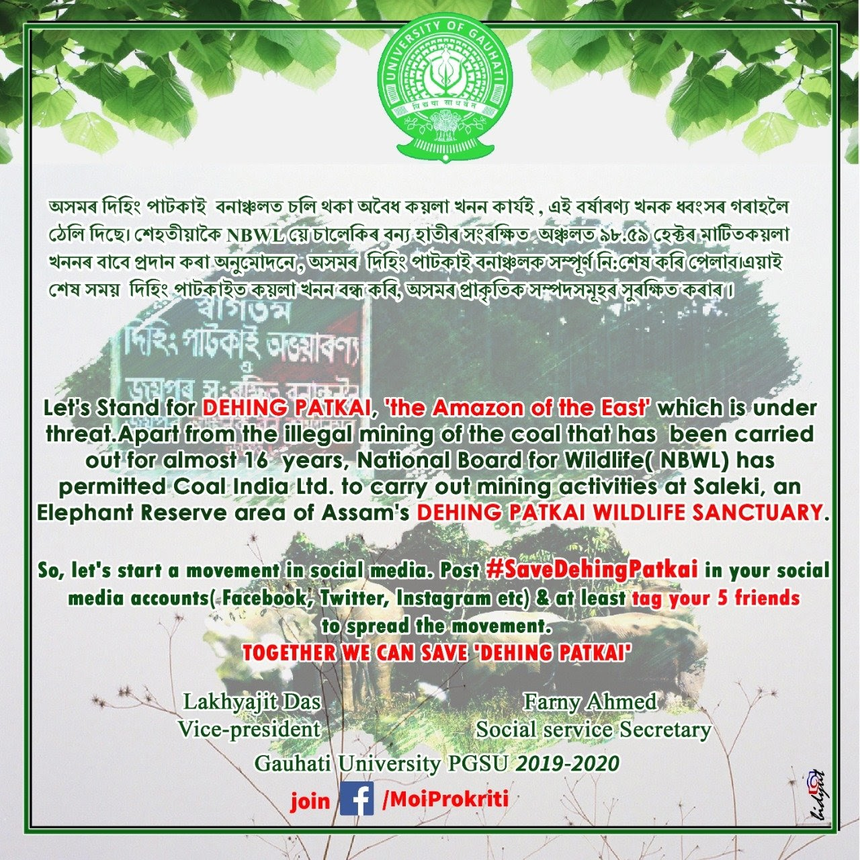 The campaign gained momentum over May 16 and May 17, when students from the university and its affiliated colleges took #SaveDehingPatkai to social media.

We urge @PrakashJavdekar @PMOIndia @sarbanandsonwal @himantabiswa to stop any current and future coal mining project in Saleki and the whole Dehing Patkai Elephant reserve as the resulting ecological disbalance will affect the country for a long time to come#SaveDehingPatkai pic.twitter.com/dmGCG4F5rl

Cottonian Jagran Mancha submitted a memorandum opposing coal mining at Dihing Patkai Sanctuary to the CM @sarbanandsonwal,@CMOfficeAssam today. We as the citizens of Assam and students of Cotton University refuse to accept the proposal. #stopcoalmine#savedehingpatkai pic.twitter.com/CEG014rtAu

The homes of rare species have been facing serious threats from illegal hunters, occupiers, and floods.