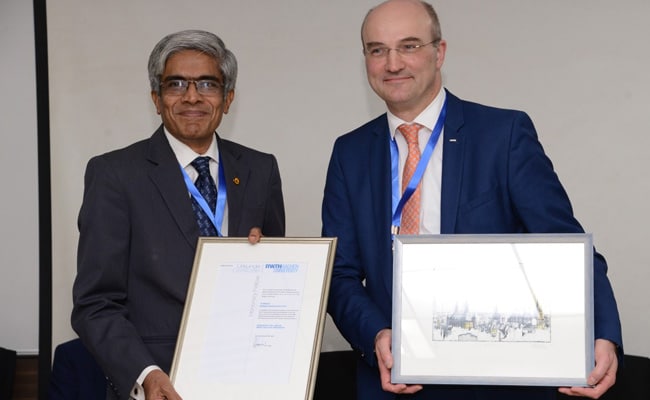 Prof. Ramamurthi was conferred the award in recognition of his scientific achievements and his contribution to collaboration between the Institutes. The award was conferred in the presence of His Excellency Mr. Walter J. Lindner, Ambassador of the Federal Republic of Germany to India.

While presenting the RWTH Honorary Fellow Award, Prof. Ulrich Rudiger, Rector, RWTH Aachen University, traced the journey of Prof. Bhaskar Ramamurthi from his days as a Ph.D. student in Electrical Engineering from the University of California, Santa Barbara, to his work at the Centre of Excellence in Wireless Technology, a public-private initiative at the IIT Madras Research Park that aims to make India a leader in wireless technology.

Prof. Ulrich Rudiger said, "The award is being conferred in recognition of Prof. Bhaskar Ramamurthi's contribution, both as the Director and as an outstanding scientist, to the strategic partnership between the two institutes. Through his work at the Centre of Excellence in Wireless Technology, he has created an ecosystem of innovation that inspires many people".

Prof. Bhaskar Ramamurthi, Director, IIT Madras, was also recognised for his contribution to the success of the Indo-German Centre for Sustainability (IGCS), located at IIT Madras, which completes ten years this year.

The IGCS serves as a centre for cooperation between German and Indian scientists on fundamental and applied research, teaching and training, dissemination of information in the area of sustainable development. Its special focus is the protection of the environment considering water resources, energy, land use and rural development and waste management.

The Centre also promotes the development of relevant ideas on and solutions to specific local issues, through interdisciplinary research and study projects in the above-mentioned areas. The IGCS will additionally contribute to the intensification of Indo-German cooperation in key academic fields.

It aims at developing the capacity and capability to promote sustainable development in Germany, India and South Asia. Sustainability with respect to economic, ecologic and social issues significantly enhances the existing research activities and courses offered at the IIT Madras.

An essential component of the IGCS's trans-disciplinary approach is the cooperation with other institutions and organisations in order to make use of existing information, research, capacity, (best practice) experience and ongoing initiatives in the different areas of sustainable development. The research of this Centre will help to meet the challenges of the global change regarding water and energy in the future.