A notification claiming INI CET 2021 has been postponed in view of Covid-19 is circulating on social media. Dr Randeep Guleria, Director, All India Institute of Medical Sciences (AIIMS), clarified that the notification is fake.

The Institute of National Importance Combined Entrance Test (INI CET) 2021 has not been postponed yet, officials told Careers360. A notification claiming the entrance exam has been postponed in view of Covid-19 is circulating on social media. The notification, dated June 8 also says that "revised dates for the conduct of the said examination will be notified in due course of time through website aiimsexams.ac.in."

Another AIIMS official, on promise of anonymity, said the authorities are considering sending SMSes to students to alert them against such fake news. “Students need to follow all the activities in the AIIMS exam website aiimsexam.ac.in or the SMS received from the exam department,” the official added. 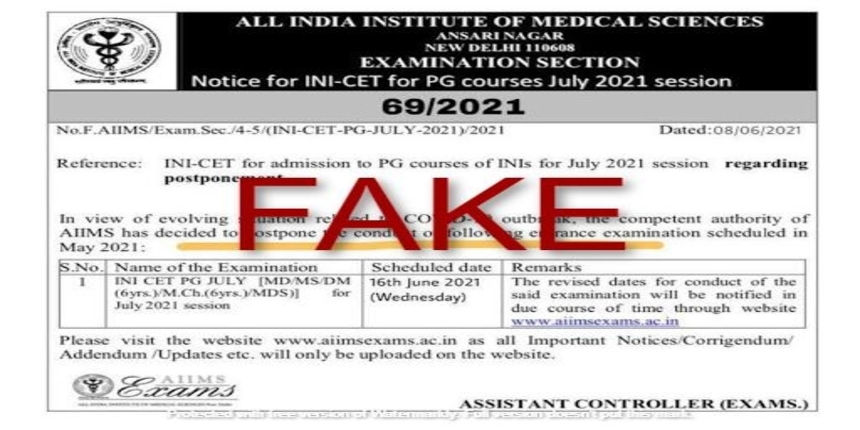 Originally scheduled for May 8, the entrance exam for admission to MD, MS, DM (6 years), MCh, and MDS courses, was postponed amid a surge in the number of Covid-19 cases in India.

Towards the end of May, the authorities had released a fresh notification according to which INI CET 2021 will be held on June 16.

Since then, doctors across the country have protested against AIIMS’ decision to conduct the exam on such a short notice. They have also highlighted health and safety concerns, logistical problems.

A group of doctors have also moved the Supreme Court of India for postponement of INI CET. The petition filed by 26 doctors states that conducting the examination will put the lives of thousands of doctors at risk.

“They (doctors) had also been promised a minimum of one month’s notice before any such exam is scheduled, a commitment that has been unreasonably and unfairly violated with the decision to schedule the exam in ten days’ time,” Mr Tharoor said in his letter.

As per the latest updates, INI CET 2021 has not been postponed. It will be held on June 16 and admit cards will be released on June 9.