IIT Madras recently hosted a Symposium on 'Apollo's Legacy and the Meaning of Moon Landing After 50 Years'. 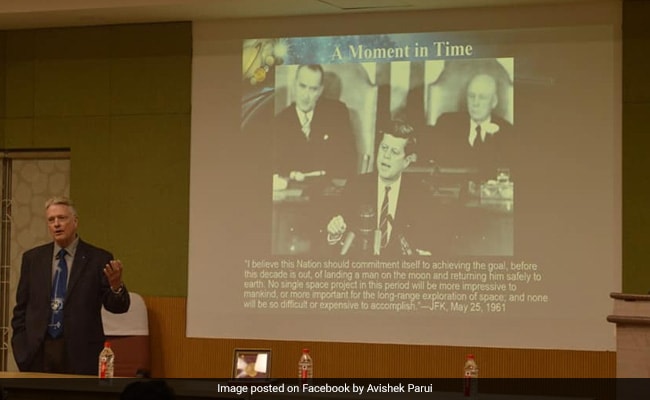 IIT Madras recently hosted a Symposium on 'Apollo's Legacy and the Meaning of Moon Landing After 50 Years', an event which was organized by the Memory Studies Research Network, IIT Madras.

Dr. Roger Launius, former Chief Historian of National Aeronautics and Space Administration (NASA), presented a scholarly account of the scientific and political significance of the Apollo Moon landing Mission, locating it in the context of the Cold War. He delineated the criticisms and controversies the event courted from various sections.

Dr. Launius spoke about Moon Landing denials in political as well as popular culture. He ended his lecture on the lasting legacy on Apollo's landing in the scientific and cultural imagination today, connecting it to the research concerns of Memory Studies as an interdisciplinary frame.

Dr. Merin Simi Raj and Dr. Avishek Parui, Assistant Professors, from the Department of Humanities and Social Sciences, are the faculty conveners of Memory Studies Research Network. The first conference on Memory Studies was organized in October 2019 which focused on the Centenary of Jallianwalla Bagh.

Prof Bhaskar Ramamurthi, the Director of IIT Madras, appreciated the interdisciplinary research prospects of the Memory Studies Network at IIT Madras, while also sharing the significance and his personal memory with the Moon Landing event in 1969.

Prof. Swarnalatha Rangarajan, Head (i/c) of the Department of Humanities and Social Sciences, spoke about the research clusters and possibilities forged by Memory Studies Research Network, while also underlining the cultural significance of Apollo 11 (the spaceflight that first landed humans on the Moon).

Dr. Avishek Parui underlined the collaborations the Studies Research Network had with KLM Dutch Airlines, Augmented Reality Lab and TCS Chennai, drawing attention to the academia-industry interface of this initiative. Referring to the scholarship of Dr. Launius, Dr. Parui mentioned the various vectors involved in Memory Studies, including archival historical research as well as new theories in Cognitive Studies and Simulation Studies.

Dr. Merin Simi Raj spoke about the significance of researchers such as Dr. Launius in the framework of Memory Studies, while also describing the future possibilities of this network at IIT Madras, mentioning a formative collaboration plan with the MIT Media Lab. She also highlighted the textual, technological, cultural, and cognitive components of this exciting field of research.