Delhi assembly elections: While the BJP has mostly centred its campaign around the Citizenship law and NRC, the Aam Aadmi Party has been highlighting the work done by Mr Kejriwal in the past five years. 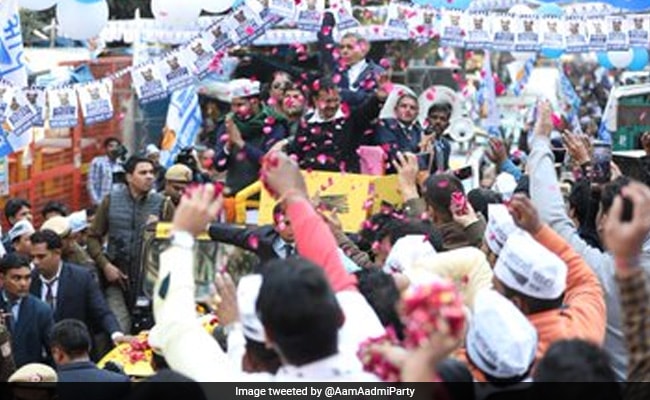 While the BJP has mostly centred its campaign around the Citizenship law and NRC, the Aam Aadmi Party has been highlighting the work done by Mr Kejriwal in the past five years. The Congress banking on the work done by Sheila Dikshit, who ruled the state for 15 years before her stint was ended by AAP. The Congress had released the names of 40 star campaigners for the polls, but has left Ms Dikshit's son out of the list.

Delhi Chief Minister Arvind Kejriwal started the day with a roadshow in Karol Bagh in central Delhi. He later visited Greater Kailash in south Delhi and addressed a public meeting there. BJP leader Amit Shah also addressed a rally in Jawaharlal Nehru stadium in the afternoon.

Here are the updates on events surrounding the Delhi assembly elections:

Jan 25, 2020 23:25 (IST)
No Desire To Be Chief Minister: Arvind Kejriwal
AAP chief Arvind Kejriwal on Saturday said he has no desire to become the chief minister of Delhi again but he is seeking vote for the betterment of the national capital.

Addressing a public meeting in Greater Kailash, Mr Kejriwal said his government has worked very hard to improve schools and hospitals and it is for Delhi's betterment that the Aam Aadmi Party needs to win the assembly election scheduled on February 8.
Jan 25, 2020 21:56 (IST)
BJP wants Delhi where Shaheen Bagh never happens: Amit Shah
Union Home Minister Amit Shah took a dig at opponents of Citizenship Amendment Act, saying the BJP wants to create a Delhi "where Shaheen Bagh never happens". He said voters should press button in favour of the party with such force that the protestors at Shaheen Bagh leave the venue by themselves when voting takes place in Delhi on February 8. Addressing "Jeet ki Goonj" programme at Jawaharlal Nehru Stadium here, he said that BJP wants a Delhi which is free of pollution, where residents have clean drinking water, uninterrupted power, good education facilities for children, world-class roads, no traffic jams and where Shaheen-Bagh never takes place," he said.
ANI Input
Jan 25, 2020 21:02 (IST)
Will make Yamuna so clean that people can take dip in it: Arvind Kejriwal
Delhi Chief Minister Arvind Kejriwal has said that if his party gets re-elected in the assembly polls, his government will make the Yamuna river so clean that residents of the city will be able to take a dip in it.

Addressing a public meeting at Greater Kailash, Mr Kejriwal said he will join the people of Delhi to go take a dip in the river ahead of the next elections.

Cleaning the river is also part of the "guarantee card" recently released by Mr Kejriwal.
PTI Input
Jan 25, 2020 20:06 (IST)
164 crorepatis in Delhi electoral fray: Report
The elections this time is seeing a big number of rich candidates contesting the polls to help their party cross the magic figure.

In the 2015 Assembly poll, 143 candidates from the AAP, BJP and the Congress had assets worth Rs 1 crore or more. This time, the number of such candidates has increased to 164, which is a nearly an 11 per cent increase.

Also, 13 candidates have declared assets worth over Rs 50 crore - the Aam Aadmi Party has 6, Congress has 4 and the Bharatiya Janata Party 3.

AAP's Dharampal Lakra has assets worth Rs 292.1 crore, which makes him one of the richest candidates in the electoral fray. Four of the richest candidates have been fielded by the AAP.
IANS Input
Jan 25, 2020 18:36 (IST)
"Limited Freebies Good For Economy": Arvind Kejriwal In Karol Bagh
Delhi Chief Minister Arvind Kejriwal held a roadshow in Karol Bagh. Mr Kejriwal said that a limited amount of freebies are beneficial as it helps boost the demand in the economy. "Freebies, in a limited dose, are good for the economy. It makes more money available to the poor, hence boosts demand. However, it should be done in such limits so that no extra taxes have to be imposed and it does not lead to budget deficits," Mr Kejriwal wrote on Twitter.

Jan 25, 2020 16:31 (IST)
"Kejriwal government cheated Delhi": JP Nadda In Delhi's Punjabi Bagh
"Kejriwal had said he would build 500 schools and 20 colleges. Not one has been made. He had promised 1.5 lakh CCTV cameras and WiFi in the entire Delhi. He has not stood up to his promises. His Government has cheated on the people of Delhi": JP Nadda

Delhi Assembly Election: 'BJP Supporters Are Like Family': Arvind Kejriwal Takes On Amit Shah
Delhi Chief Minister Arvind Kejriwal hit out at Union Home Minister Amit Shah for the second straight day, this time over the senior BJP leader's visit to a party worker's house. Mr Shah had tweeted photos of him having lunch at the worker's house along with Delhi BJP chief Manoj Tiwari after ending his campaigning on Friday for the February 8 Delhi Assembly election."
Jan 25, 2020 15:03 (IST)
Four-time BJP legislator and ex-minister joins AAP

Dal, vegetables and roti were served to both. According to a BJP leader from Yamuna Vihar, the dinner programme was a sudden decision. During this time, only two other leaders were present inside the house, besides Amit Shah and Mr Tiwari.
Shah has been eating at houses of the party workers during his tenure as the BJP President. Prior to the 2014 Lok Sabha election, when he was entrusted with the charge of UP, Mr Shah used to eat food at the workers' house every day.
During this time, this attitude of Shah was highly appreciated. However, this tradition has been outdated in the BJP and the Sangh. But during the Delhi election campaign, Mr Shah's arrival at the common functionary's house is nothing short of a surprise.
Jan 25, 2020 14:08 (IST)
BJP leaders have "irritated" the people of Delhi by raising the amended citizenship act and NRC during election campaign and it would "backfire" on them, senior AAP leader and minister Gopal Rai has said.
"BJP has not done any work and is raking up these issues which has in turn exposed the negativity of the saffron party," Mr Rai said.
"People are getting irritated by the way BJP is raking up CAA, NRC and it is showing the BJP in bad light. The people who voted for the BJP in Lok Sabha polls are also supporting AAP in the upcoming polls," he said.
Jan 25, 2020 14:08 (IST) 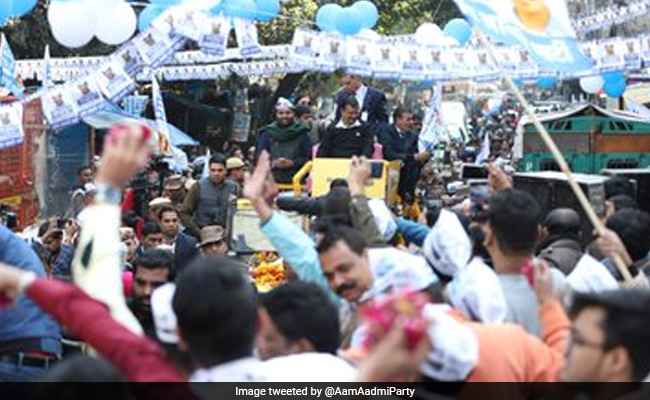 Delhi Chief Minister Arvind Kejriwal started the day with a roadshow in Karol Bagh in central Delhi. He will later visit Greater Kailash in south Delhi and address a public meeting there.
Jan 25, 2020 14:05 (IST)
The Congress banking on the work done by Sheila Dikshit, who ruled the state for 15 years before her stint was ended by AAP.

The 15 years of congress rule were the Golden Days of Delhi because it was a people's government with development at its heart.

We have together taken Delhi to great heights before, let's do it again. pic.twitter.com/xaRABHcmZF

Jan 25, 2020 14:05 (IST)
The BJP has mostly centred its campaign around the Citizenship law and NRC, the Aam Aadmi Party has been highlighting the work done by Mr Kejriwal in the past five years.
Delhi assembly electionsAAPBJP