Shaheen Bagh Protests: On Tuesday, the police started the process of clearing that stretch of the city following orders from the Delhi High Court on a petition citing huge traffic problems on a vital connecting road 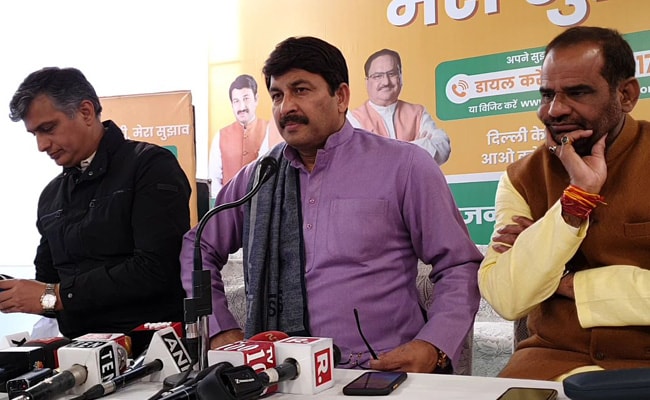 Delhi BJP chief Manoj Tiwari has tweeted a video appeal for hundreds of women and children who have been protesting in the Shaheen Bagh area of the city for a month now against the Citizenship (Amendment) Act and the National Register of Citizens. In the video, the BJP MP urges protesters to call off their agitation as he attacks Chief Minister Arvind Kejriwal for "ignoring plight of lakhs of people facing inconvenience because of the protests".

"I am making this video because I am distressed... Lakhs of people in the city are facing inconvenience everyday because of protests at Shaheen Bagh. They are completing a 25-minute journey in two-three hours," the 48-year-old leader says in the clip that he tweeted this morning.

"I appeal to all of you (Shaheen Bagh protesters). The CAA is not against any religion - Sikhism, Christianity or Islam. The law is just to give citizenship to those who have come from Pakistan, Bangladesh and Afghanistan... not to snatch anyone's citizenship," the BJP MP further says.

In his nearly three-minute long clip, Mr Tiwari also insists that rumours are being spread about NRC. "There is no NRC in the country... who is spreading these rumours? Please vacate the roads, I appeal to you," he says.

Shaheen Bagh is near Kalindi Kunj, which connects Delhi to its neighbouring cities like Faridabad and Noida. For weeks, people have been forced to take a different route to bypass the massive protest. This has also caused jams on the Delhi-Noida-Delhi expressway, inconveniencing people who travel to south Delhi from Noida.

On Tuesday, the police started the process of clearing that stretch of the city following orders from the Delhi High Court on a petition citing huge traffic problems on a vital connecting road. The police have been directed to use "persuasion" rather than force to open the vital connectin g road, a senior official has told NDTV.

Accusing Chief Minister Arvind Kejriwal of turning a blind eye to "lakhs of people facing inconvenience", Manoj Tiwari says: "Ideally, Arvind Kejriwal should have urged you to call off the protests... But he is apparently glad that people are facing inconvenience. He is unaware of the problems in the city. Please send your representative to my home... I am ready to hold discussions."

Protests have erupted in several parts of the country against the CAA, which aims to expedite citizenship for migrants from minority communities in three neighbouring countries, leaving Muslims out of its ambit. Critics say that the law, when implemented along with the National Register of Citizens (NRC), will threaten genuine Muslim citizens in the country.